ARM has unveiled its second generation of Mali-T600 series GPUs that promise to bring up to 50 percent higher graphics performance and lower power consumption when compared to current generation Mali GPUs. ARM has announced no less than three new Mali-T600 series GPUs that will each aim at a different market segment, or simply different device. The Mali-T624, T-628 and T-678 are the first to include Adaptive Scalable Texture Compression that is adopted by the Khronos Group.

The second generation of Mali-T600 series GPUs are all still based on ARM's Mali Midgard architecture and, as noted, aimed and tuned to provide optima performance and energy-efficiency of different end devices. The Mali-T624 and Mali-T628 will be aimed at smartphones and smart-TVs while the Mali-T678 is optimized for the demands of the quite lucrative tablet market.

The Mali-T624 will offer scalability from one to four cores, while Mali-T628 will feature up to eight cores and provide twice the graphics and GPU compute performance of the Mali-T624. Apparently, both of these are aimed at both smart-TV and smartphone devices depending on the actual need for performance.

The ARM Mali-T678, on the other hand, will offer highest GPU compute performance available and is said to deliver a four-fold increase when compared to the Mali-T624 GPU, all thanks to features such as an increased ALU support. According to specifications, the Mali-T678 delivers a 50 percent improvement over, yet to be seen, Mali-T658 GPU. As a highest performing Mali-T600 series GPU, the Mali-T678 is aimed at tablet market.

As noted earlier, the second generation Mali-T600 series GPUs will be the first to include Adaptive Scalable Texture Compression (ASTC), a texture compression technique that comes directly from ARM. The ASTC supports a very wide range of pixel formats and bit rates thus enabling higher quality when compared to other formats. ASTC, according to ARM, should significantly optimize GPU performance and increase battery life in devices and reduces Mali GPU memory bandwidth and memory footprint.

The newly announced second generation of the Mali-T600 series GPUs have been already welcomed by the likes of Fujitsu Semiconductor, Samsung, Rockchip and Nufront, so we guess it is just a matter of time before we see one of these in some device.

You can check out more about ARMs Mali-T600 series GPUs here. 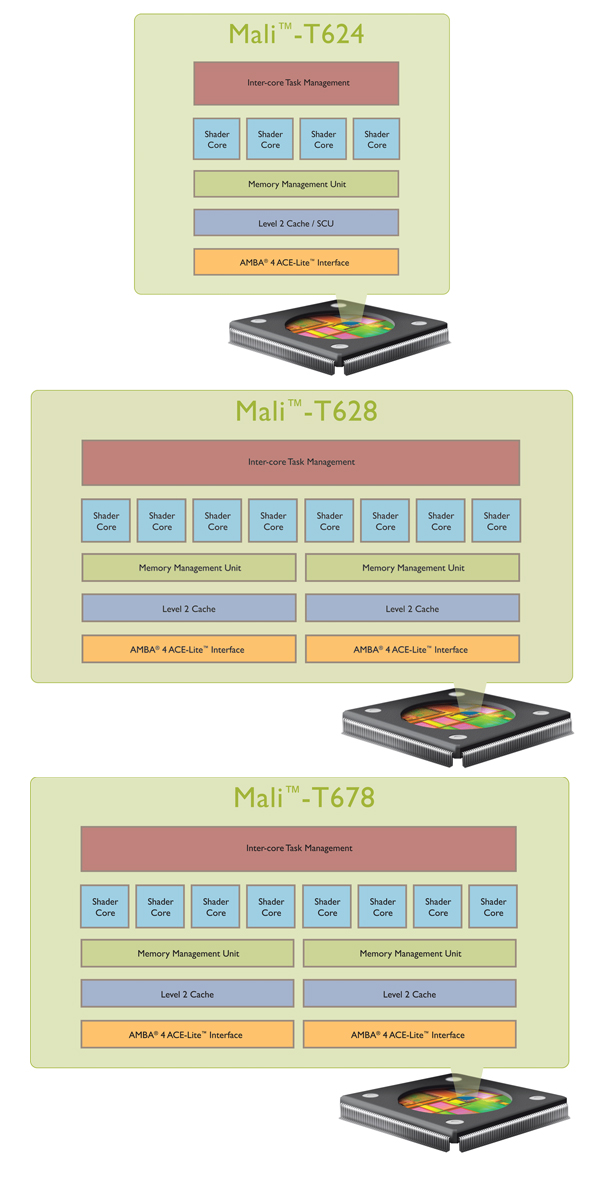 Last modified on 07 August 2012
Rate this item
(0 votes)
Tagged under
More in this category: « AMD officially launches its FirePro lineup Gainward GTX 680 previewed »
back to top