GPU Boost is an important factor in the entire GTX 600 series, since it controls how much and when to auto-overclock the GPU. Below you’ll find GPU clocks we got playing Metro 2033 at 2560x1600. Base clock is the guaranteed clock while Boost and all other clocks depend on whether the GPU is working too hard, whether thermals are fine and whether consumption is optimal. GPU Boost is good because the chip is used to the max and users don’t have to mess with overclocking since the card is already doing it itself.

TGT handpicked only the best chips with low leakage, which should result in top auto-overclocking results. Thermals are also important and GTX 680 Ultra Charged’s cooler keeps GPU temperatures below 70°C – as much as 10°C lower than on the reference GTX 680.

The following graph shows GPU clocks on another GTX 680, whose GPU Boost clocks change more often. Such a card is representative of pretty much all the GTX 680s we’ve tested.

We measured one of the results in the table by downclocking Ultra Charged’s GPU and overlocking the memory, so as to match the GTX 680 Signature. 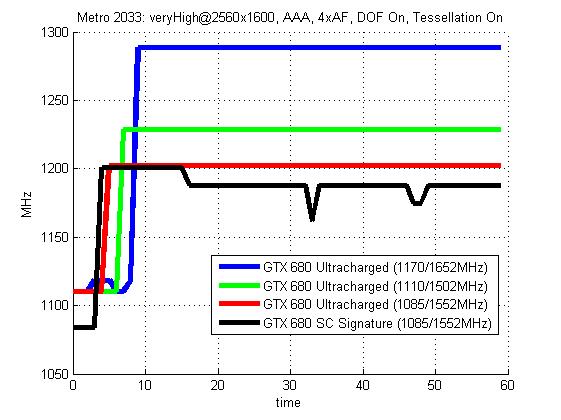