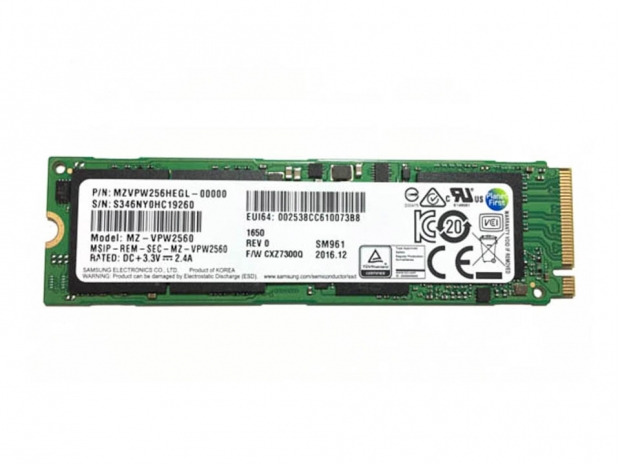 For its third-generation M.2 SSD lineup, Samsung has introduced two OEM drives – SM961 and PM961 – and two consumer focused drives – 960 Pro and 960 Evo. All four of these solid state disks feature the new Polaris controller and are based on the NVMe protocol running on a PCI-E 3.0 x4 interface. The main difference is that the OEM series uses 48-layer MLC NAND, while the consumer series uses 48-layer TLC and MLC V-NAND, depending on the particular unit. 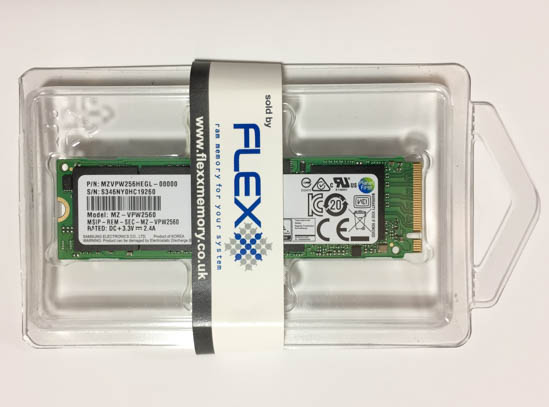 This particular drive was bought from FlexxMemory in the UK and was received in a small plastic casing with just the bare drive for a total price of $147.77, though it is now available for $163.96. By contrast, the consumer-oriented Samsung 960 EVO 250GB M.2 drive was announced back in October but is currently listed as a pre-order on most sites for $129.99. That drive is expected to become available within the next six weeks. 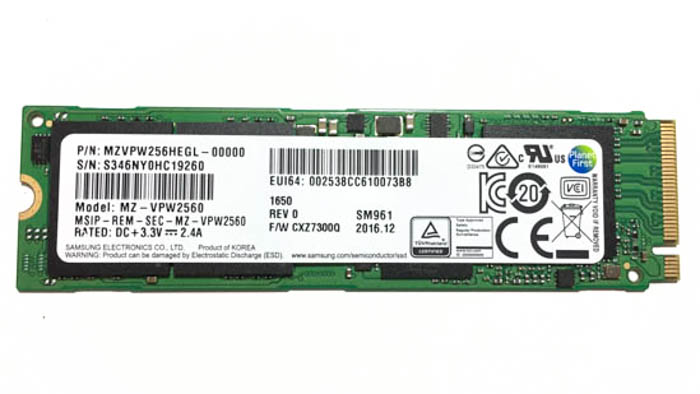 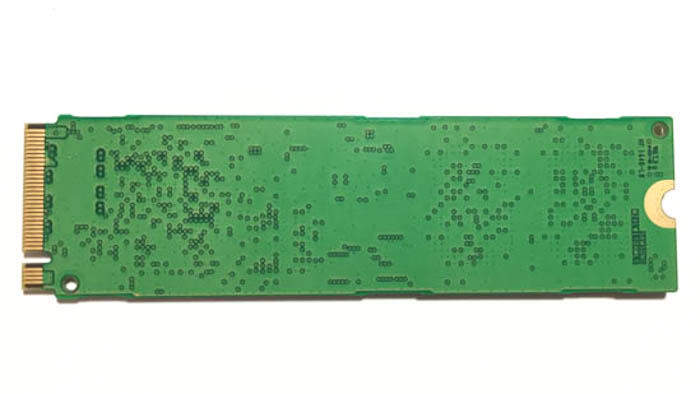 While the US version of Samsung’s website does not include a data sheet on its SM961 or PM961 series OEM drives, it does list their basic product specifications, including random speeds, sequential speeds and IOPS throughput, along with the form factor and interface type.

Samsung's 256Gbit 48-layer MLC NAND flash is dense enough that all capacity options in the SM961 series come in a single-sided 2280 M.2 form factor, including the 1TB model. The previous SM951 shipped with Samsung’s planar MLC NAND flash, which gave it a slight endurance disadvantage in comparison to the retail 950 Pro drives with 32-layer V-NAND. Meanwhile, the newer consumer-oriented 960 PRO ships with 48-layer MLC V-NAND, while the more equivalent 960 EVO ships with 48-layer TLC V-NAND.

This particular 256GB SM961 drive features an eight-channel Samsung Polaris (S4LP077X01-8030) controller and a 1GB LPDDR3 cache. Power consumption is rated at 5.9 watts in operational mode and 2.5mW in devSlp low-power standby mode. While there is no endurance rating (TBW) for this drive, it includes a 3-year warranty for OEMs, versus the 5-year warranty found on the 960 Pro and 960 Evo lineups.

While the choice of NAND density may be an important selling point for some folks, the feature differences between Samsung’s OEM and consumer drives are also quite an interesting mix. One tradeoff between the OEM SM961 and the consumer 960 EVO is that the former features end-to-end data protection during power loss while foregoing a ~20,000 IOPS drop in random write performance. Meanwhile, the latter supports AES 256-bit user data encryption, TCG/Opal, and dynamic thermal throttling management at the sacrifice of using less durable TLC NAND.

All four of Samsung’s latest Polaris-based M.2 drives also boast a mean time between failure (MTBF) rate of 1.5 million hours, making them sufficient for high-demand workloads. While the SM961 256GB OEM drive does not include a total bytes written (TBW) rating, the most similar consumer model on the chart would be the 256GB 960 Evo, which is rated at three years, or 100TBW.