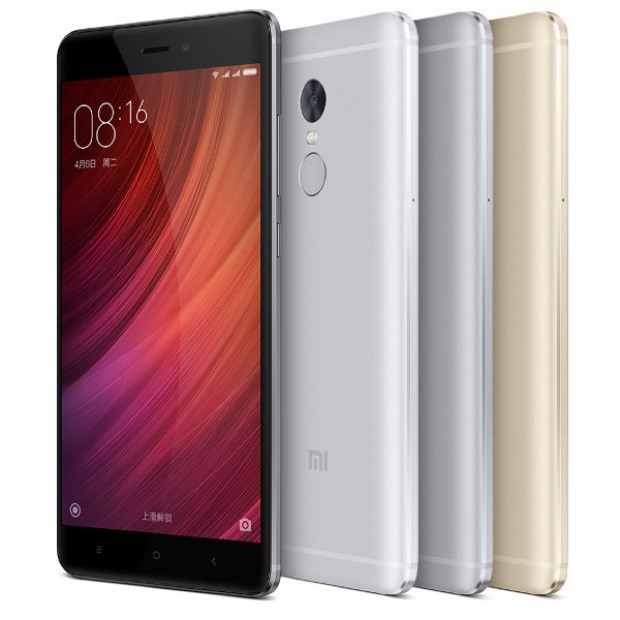 10-core does the heavy lifting

Xiaomi is a company that sold over 41.5 million phones in China and the number is even higher when you add markets like, India and the Rest of the World. The company is well known for its mix of MediaTek Helio and Snapdragon products and usually offers the best price performance ratio.

The Xiaomi Redmi Note 4 phone is selling well North of $200 and €200 and is available with 3GB and 32GB RAM, as well as 3GB and 64GB storage. The model we tested comes with Helio X20 SoC clocked at 2.1Ghz. Let me remind you that this is a deca-core SoC with three different clusters. 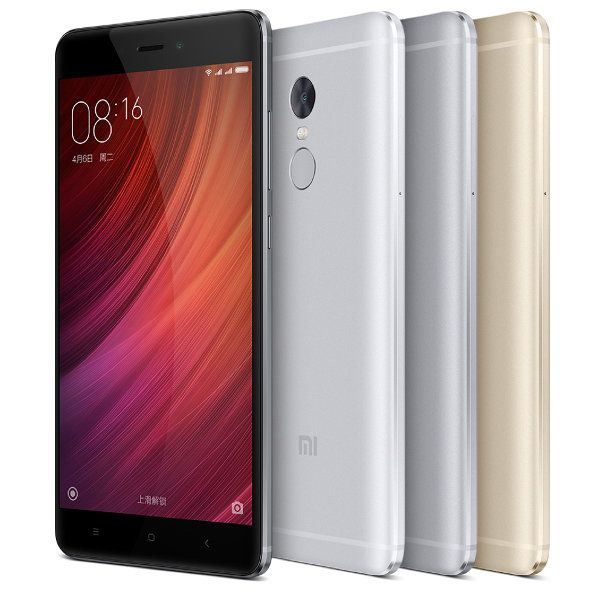 Helio X20 is a unique processor and deserves some additional spot light. This was a product announced in May of 2015 as the World’s first tri-cluster architecture with CorePilot 3.0, using a unique advanced scheduling algorithm. The scheduling algorithm allows for a reduction of power consumption compared to dual cluster implementations. This is important to users who wish to have a charged phone by the end of one’s day.

The Deca/10-core architecture relies on three CPU clusters. The main and the fastest cluster is equipped for extreme performance and runs up to 2.1- 2.3 GHz. It comes with two Cortex A72 processors which are the fastest that ARM has to offer, in 20nm. 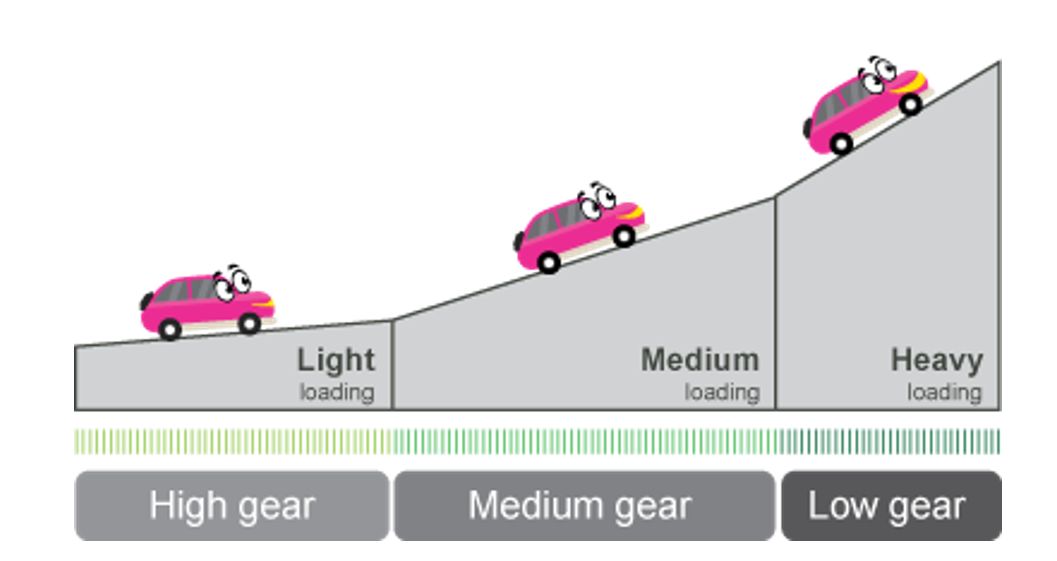 One of the key things to understand about the Helio X20 processor is that the three-cluster architecture is meant to save some power and give you performance when needed. MediaTek calls this CorePilot and describes this like having three gears in a car. You are in the high gear with light usage and then shift to a medium gear when you have a medium loading and finally use a low gear for heavy loading.

The Helio X20’s CorePilot architecture ensures that the appropriate high performance A72 cores kick in whenever necessary, for example when you load a video game, such as Asphalt8 or Minions. In theory, this happens every time you load any game or even a Facebook app. The CorePilot will try to load the application at the quickest possible time and hand over the load from Core A72 cores from the low gear, to a second Cortex A53 cluster in the medium gear. Once the application is loaded, such as a webpage or a pause in your game, the CorePilot will hand over the application to a high gear and the power saving energy saving Cortex A53.

The Xiaomi Redmi Note 4 that we tested came with X20 2.1GHz Deca-core, 3GB RAM 32GB ROM 2.5D and 32GB storage. The phone has the 5.5 inch Full HD screen and MIUI 8.7.2.9 software. This is a dual SIM phone that supports external storage up to 128GB and leaves little to desire in this price category.

It comes with 13 megapixel read camera as well as 5 megapixel front camera.

Some benchmarks including Antutu react positively on the CorePilot. Compared to a two-cluster approach, you can clearly see that the Cortex A72 cores kick in and dominate the Antutu score. Both Helio X10 and Helio P10 have two Cortex A53 clusters that have to do light, medium and heavy lifting. The Xiaomi Redmi Note 4 with Helio X20 even outperforms the Xiaomi MI MAX Snapdragon 652 powered SoC by almost 10,000 points. 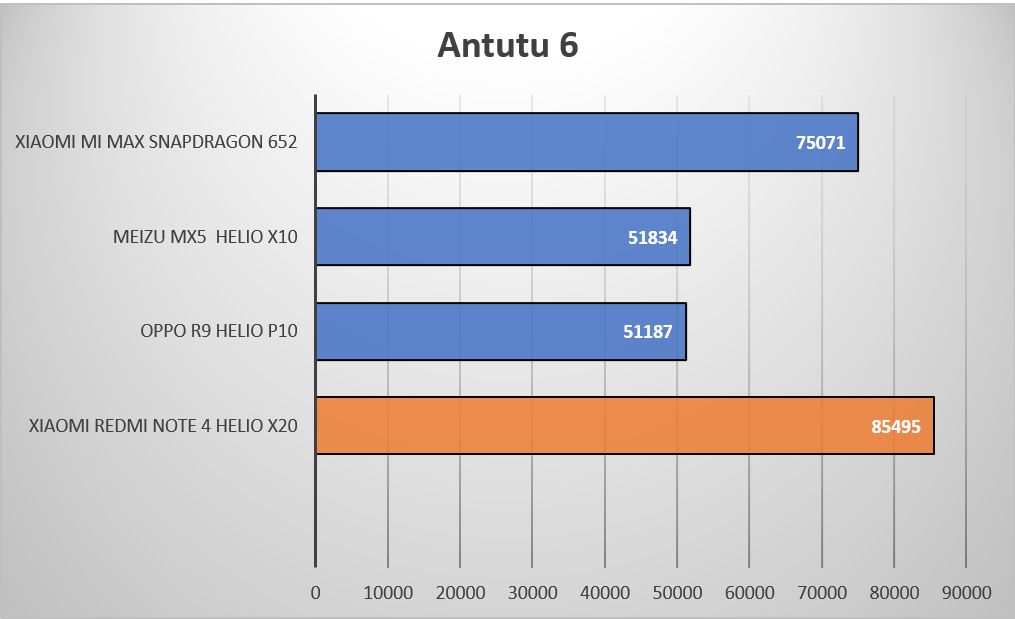 In the GeekBench 4 single score, once again you can see the clear dominance of the Cortex A72 cores over the Cortex A53’s and the application has a huge advantage in single tread intensive. tasks. Helio X20 shows negligible advantage over Snapdragon 652. 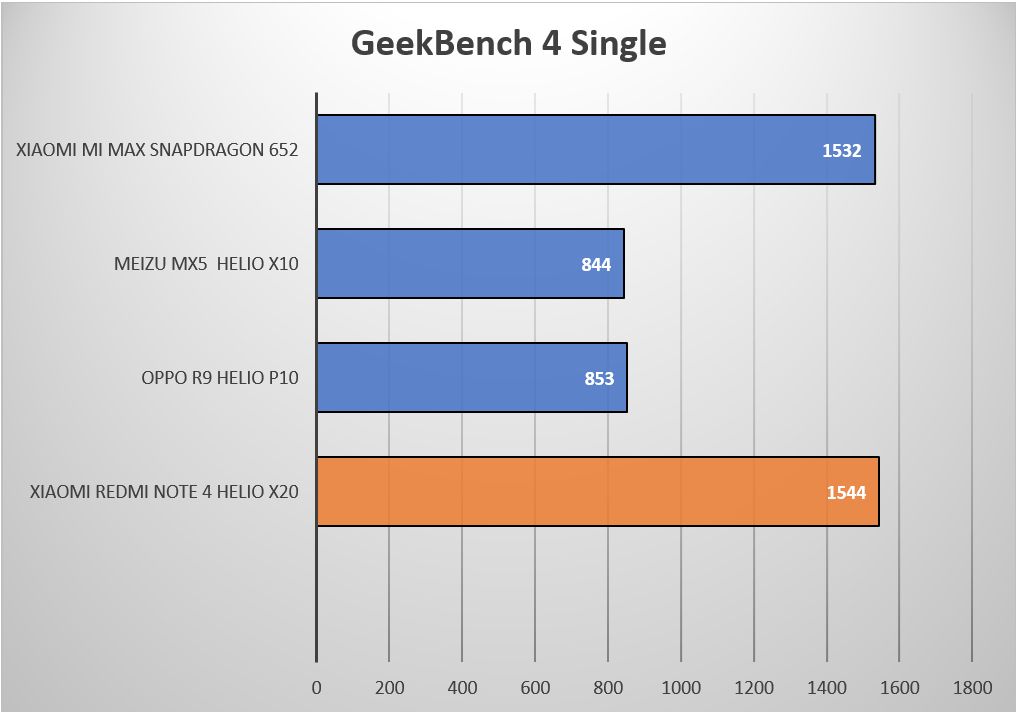 The situation changes in the multi core benchmarking where the score gets close on the Helio X20, Snapdragon 652 and the Helio X10. Let me remind you that the Meizu MX5 uses Helio X10 turbo version (CPUs that run at a higher frequency), while Redmi Note 4 uses Helio X20 M (lower CPU frequency version), and that’s the major reason why MX5 can score high in some scenarios. However, the key point is the Redmi Note 4 uses MediaTek's new scheduling methodology so the Cortex-A72 (big cores) and can work longer in more scenarios while still being power efficient. This is something that we found during our testing-- the battery life was significantly better on the Xiaomi Redmi Note 4 with Helio X20 compared to Meizu MX5. 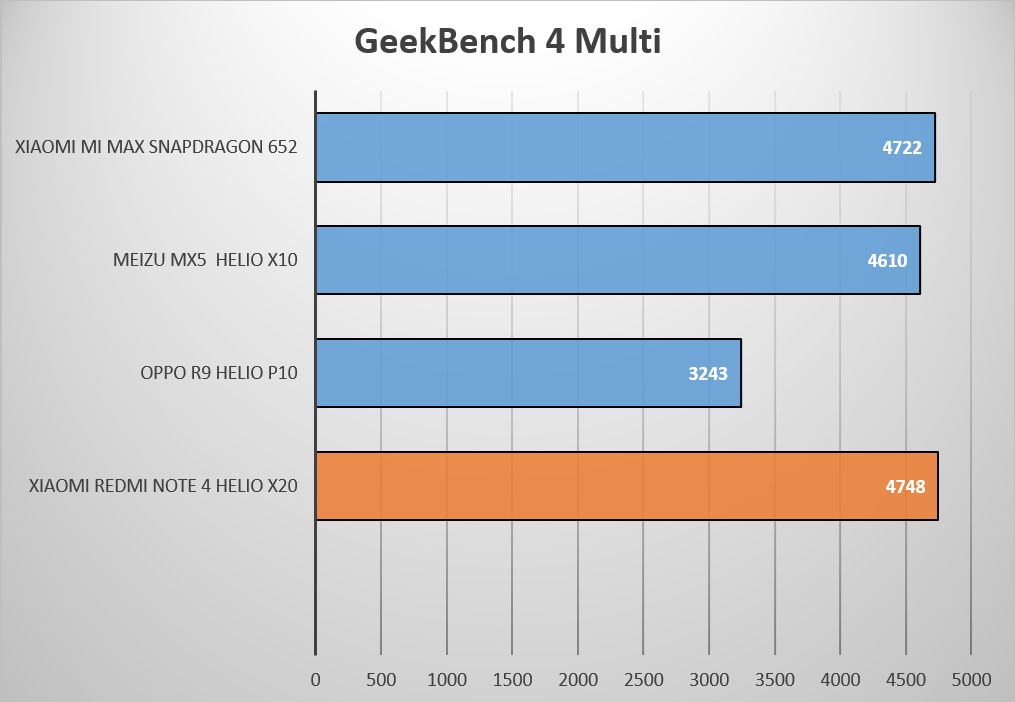 PC Mark clearly likes the three cluster approach and the performance of the A72 cores. You can see that it scores much faster compared to the other Helio phones. It outperforms the Snapdragon 652 powered Xiaomi MI MAX , but not by much. 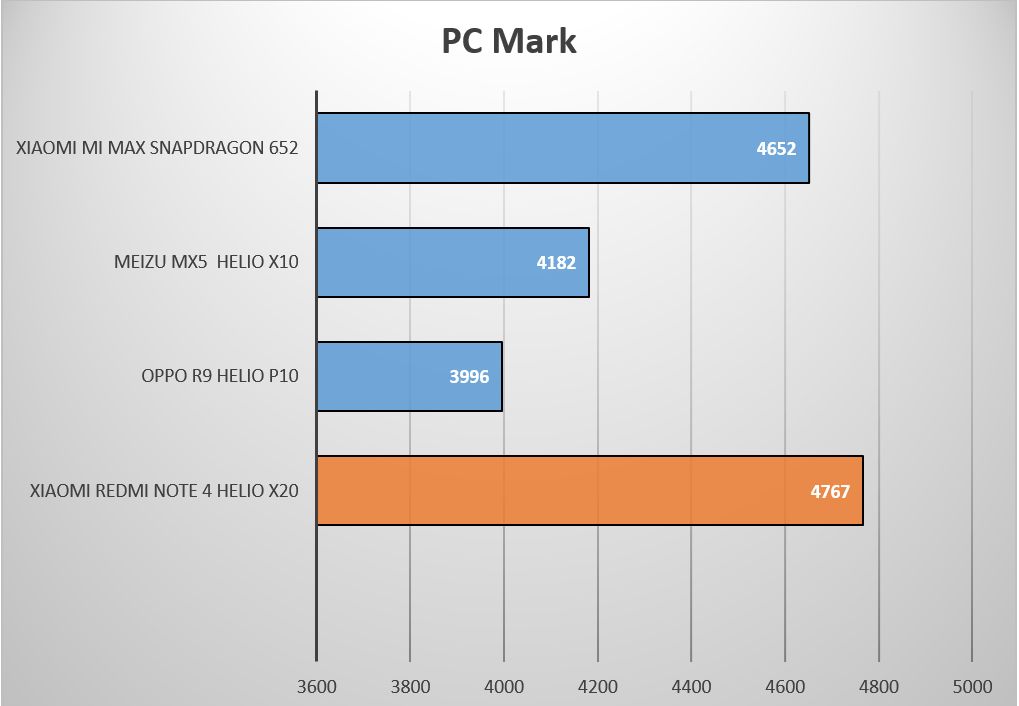 Basemark OS II, the user interface test, really likes the three-cluster combination. You see the clear advantages of the CorePilot three cluster approach. We observe the same trend, and the Helio X20 once again beats the Snapdragon 652. 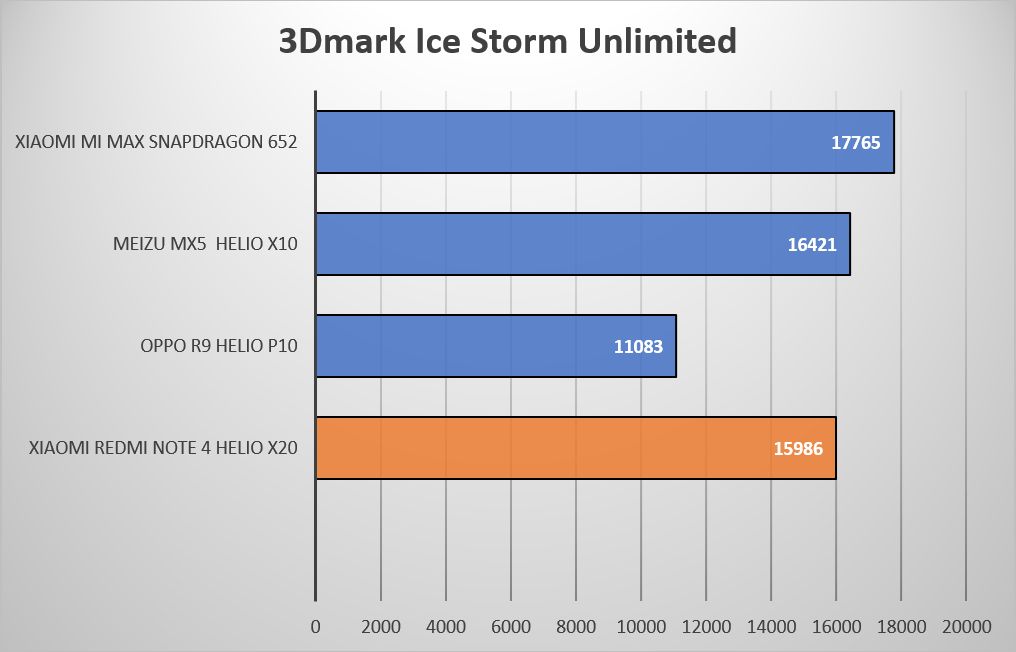 3Dmark Ice Storm Unlimited shows that the results are even from the last’s years top SoC but again a clear difference compared to the mainstreams oriented Helio P10. The Snapdragon 652 GPU shows its power in this particular test but we’ve noticed that games load faster on the Helio X20 compared to Snapdragon 652.

The clever Helio X20’s CorePilot architecture gives a user the high performance A72’s, at the same time, two Cortex A53 clusters to save significant power. All three clusters work together to give one the optimal solution which yields performance and power. No chip company in the market today has engineered their brains to work in this manner.

One of the most important features, that needs to be underlined, is that Redmi Note 4 uses MediaTek's new scheduling methodology so the Cortex-A72 (big cores) can work longer in more scenarios while still being power efficient.

There is no doubt that the Xiaomi Redmi Note 4 has a clear price advantage over other phones in its category while offering a user better performance compared to the competition. At the publication time, you can buy this phone for as low as $193/€183, which is an incredible value for a great mainstream phone.

In summary, MediaTek has designed and engineered a compelling product with the Helio X20 and it shows in the Xiaomi Redmi Note 4.