If you have the GTX680/670, you know that leaving the card run is the first step of overclocking. Namely, GPU Boost technology will make sure to overclock the GPU once we start playing. Below you see a graph showing GPU clocks while playing Metro 2033 test at 2560x1600.

Although the base GPU clock on EVGA’s GTX 670 FTW is 1006MHz, we see that the average GPU clock is much higher, with a maximum climbing up to 1150 MHz.

We threw in GTX 670 Ultra Charged’s clocks as well, just for comparison. Naturally, even comparing two graphics cards with GPUs set at the same base clock, it’s possible to get different results. While quality of the chip itself may prove decisive, it’s the often the cards with quality cooling that score best. 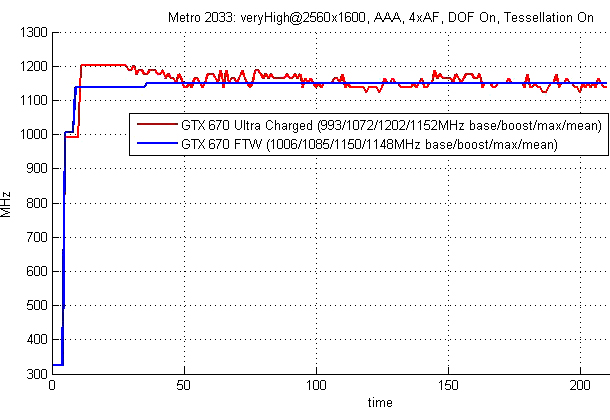