On 13th of February , AMD launched its HD 7000 series of cards - or HD 7770 and HD 7750 to be more precise. We're talking about graphics cards with next generation chips with the so called GCM Graphics Core Next architecture, which promise to deliver improved performance at a lower power cost. Our today's guest is XFX's DD Radeon 7750 800M 1GB (FX-775A-ZDFC) graphics card that's special for its special dual fan design. As you'd suggest, the DD in the name stands for Double Dissipation cooler design. The DD Radeon 7750 800M 1GB runs at reference clocks , i.e. 800MHz for the GPU and 1125MHz for the memory (4500MHz GDDR5).

AMD showed the reference design of its HD 7750s but all the cards we've seen thus far at least got their cooling changed. However, we must commend XFX on strapping its Radeon 7750 with DD cooling. We know that the DD cooler is effective and quiet, since we had it on our Black Super OC DD Radeon 7770 1120M 1GB graphics card that runs at 1120MHz. We're quite sure that the same cooler will have no trouble cooling the Cape Verde Pro GPU on our HD 7750. Note that this GPU is clocked slower than the Cape Verde XT, and we hope that the cooling won't be a limiting factor when it comes to additional overclocking. 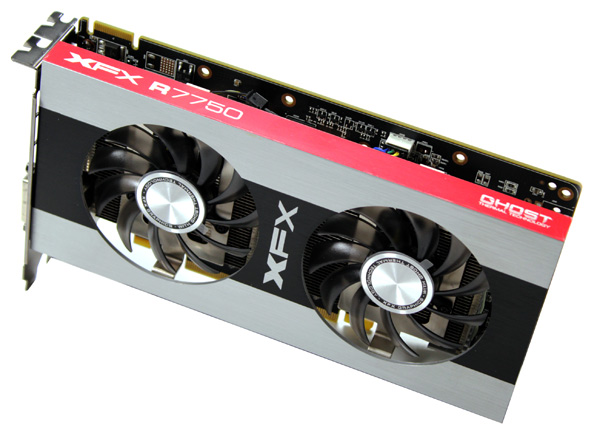 XFX’s DD Radeon 7750 runs at reference clocks, as the GPUz screenshot below confirms.

Prev Next »
Last modified on 06 March 2012
Rate this item
(0 votes)
Tagged under
More in this category: « Xperia S put to the test, NFC and HD screen in tow NZXT Switch 810 Full Tower Chassis reviewed »
back to top