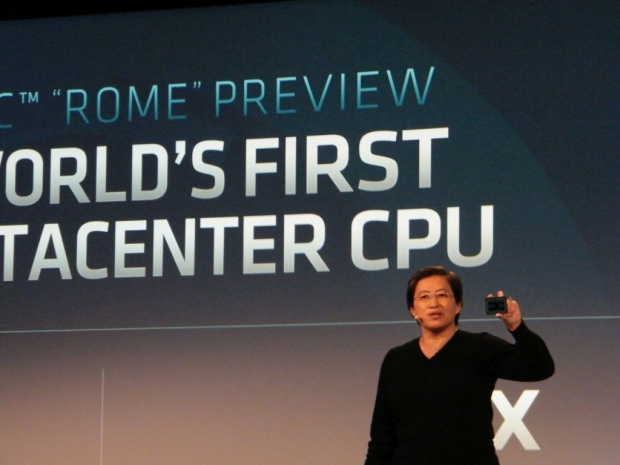 AMD has announced its upcoming EPYC "Rome“ CPU, the world's first 7nm datacenter CPU based on Zen 2 architecture and packing up to 64-cores/128-threads.

At the special AMD "The Next Horizon“ event, AMD confirmed its total commitment to the datacenter market, unveiling both the new 7nm Vega-based Instinct MI60 as well as showing some of the first details and performance figures for the upcoming 7nm EPYC "Rome“ datacenter CPU.

AMD also talked about Zen 2 CPU core and modular design methodology with the so-called chiplet design but we will cover that one in a separate article.

According to revealed specifications, the 7nm EPYC Rome datacenter CPU will pack up to 64 Zen 2 cores with 128-threads, offer increased instructions-per-cycle, as well as bring leadership in compute, I/O, and memory bandwidth. AMD claims.

While the company still did not reveal any specific clock details, due to the fact that the CPU is still in the prototype phase, it did reveal some specific details, like the fact that this is the first PCIe 4.0 capable x86 server CPU, which both brings double the bandwidth/channel, as well as dramatically improves accelerator performance on the entire platform.

Performance wise, EPYC Rome will bring 2x the performance per socket and 4x floating point per socket improvements, compared to the previous generation.

In a head-to-head performance preview, AMD's single-socket EPYC Rome not only managed to match but actually be faster than Intel's dual-socket platform, showing the potential of a 7nm EPYC Rome CPU based on Zen 2 architecture.

AMD was also focused on providing a stable roadmap revealing that Zen 2 EPYC Rome is sampling now, with availability expected in 2019, while Zen 3 Milan is on track and should come sometime in 2020. 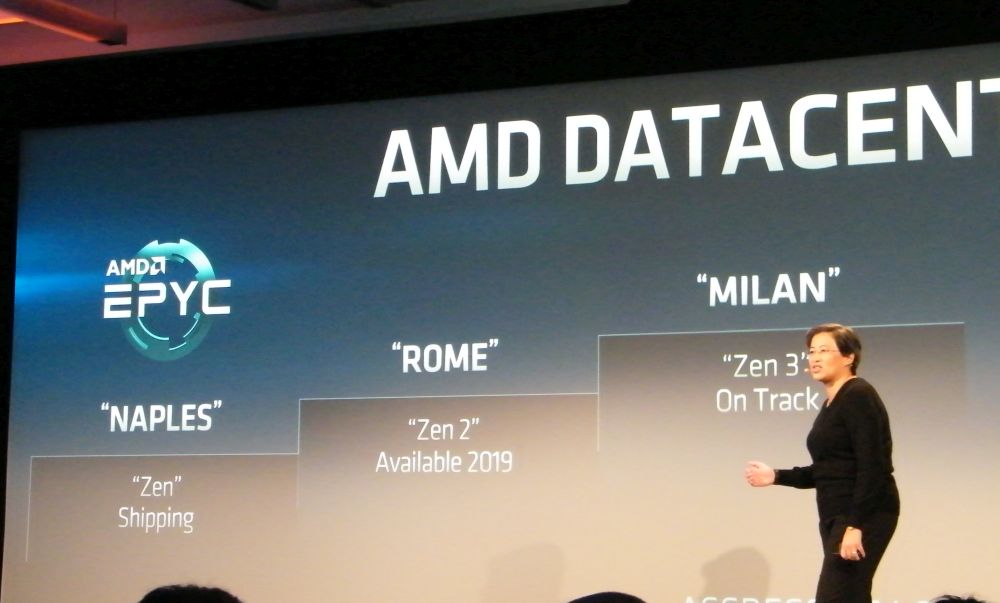 Last modified on 07 November 2018
Rate this item
(0 votes)
Tagged under
More in this category: « Google wants to prove quantum supremacy Qualcomm ordered to licence modem technology to rivals »
back to top