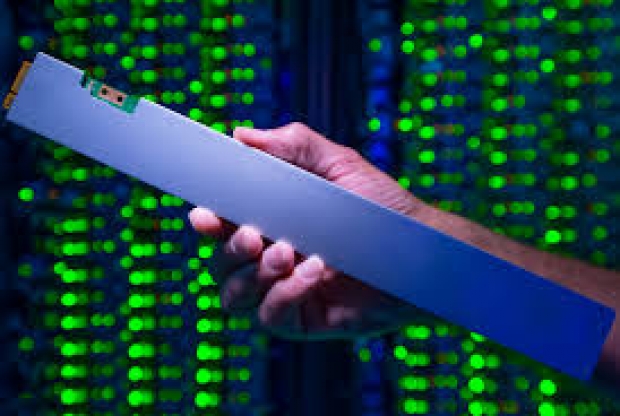 The chip giant first set out this form factor a year ago, based on the Enterprise & Datacentre Storage Form Factor (EDSFF) standard for server makers to cut cooling costs and offer a more efficient format than SSDs in the classic 2.5 inch size.

Server makers can jam up to one petabyte (PB) -- or a thousand terabytes (TB) -- of data into 1U server racks by lining up 32 of these 32TB Intel rulers together.

So, instead of the decades-old 2.5-inch square SSD drives inherited from and designed for disk-based storage, Intel now has long and skinny sticks, thanks to flash.

The new shape allows it to optimise SSD storage density, cooling, and power for data centres. Samsung's take on this is its Next Generation Small Form Factor (NGSFF) SSD standard, announced last year and aimed at replacing the M.2 SSD standard.

Samsung boasted it could fit up to 576 terabytes (TB) in a 1U rack, and in January enterprise storage vendor Supermicro announced a 1U server with space for 36 of Samsung's NGSFF non-volatile memory express (NVMe) SSDs that supported up to 288TB per system.

Intel says one of the key advantages over disk is that its ruler is cooler, helping companies reduce demand for air conditioning.

Last modified on 10 August 2018
Rate this item
(0 votes)
More in this category: « ADATA unveils its new XPG Spectrix D41 TUF RGB DDR4 memory Intel about to release a Lake of Whiskey »
back to top