Jensen thinks Quantum is the future 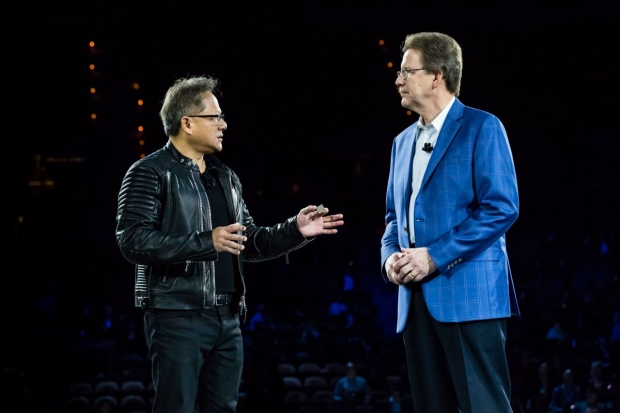 Exclusive:  Will be important

Last week at the GTC we saw Jen Hsung Huang, the founder and CEO of Nvidia walking by, and of course, we had to ask him a question. The single thing I wanted to ask was his opinion about Quantum computing.

This was rather a fly by conversation and he was polite enough to answer that he thinks that Quantum computing will be an important technology in the future. Then we walked away with his entourage checking out some partner's booths at its own GTC conference last week in San Jose. Just for the record, when we asked a question, he was wearing the same jacket as on the picture above.

Quantum is not an area where Nvidia dominates, and this might be one of the reasons why Jensen didn’t want to engage in a more in-depth conversion. Nvidia is still riding the AI wave. Artificial Intelligence is what got Nvidia to be a $133.93 billion company. Just a few days ago, when I was writing a story Nvidia was a $144 billion-dollar company, so much for Wall Street making any sense.

Artificial Intelligence is definitely touching most parts of life and Nvidia has a good tool for it, and somehow the hardware maker takes the credit for all the job that software developers are doing. Nvidia has software called the driver and some APIs, but this only enables people to do cool things in AI, on an Nvidia platform.

This is nothing new, Nvidia takes a lot of credit for games running faster, despite the fact that it actually makes the GPUs and the drivers but not the games.

Quantum to challenge GPU in AI

Quantum computing is the future and may be able to dramatically outpace any other CPU and GPU that is currently performing AI. This is one of the applications that can dramatically gain from the Quantum way of thinking.

IBM looks like a leader in this field and Jensen was part of IBM's AI keynote and gave a lot of credit to some IBM leaders on the stage such as John Kelly, IBM’s senior vice president of cognitive solutions and IBM Research. These two companies are working very closely together as some Nvidia customers want a PowerPC and Nvidia Tesla V100 GPUs running NV link 2 on the same machine. This gives them a 46 times faster speed than the TensorFlow on Google cloud. Both Nvidia and IBM compete and work with Google.

For the time being the Nvidia roadmap is overshadowed with the few GPUs that will do Artificial Intelligence faster and faster, and of course, that will make gaming and RTX (Ray Tracing) faster. The real issue that might happen in the future is that a Quantum computer with enough cubits has the potential to do AI tasks much faster. Remember CPU and GPU are using ones and zeros, and despite the fact that you can do this really fast, some new hardware approach such a Quantum can do this 1000s of times faster.

This is coming in the future but not too distant a future. Commercial applications of Quantum might start with a few hundred’s of CUBITs and this is only a few years away. Some researchers predict that in 2020 to 2021 we might see commercial quantum computers, but the potential could be disruptive for the current leaders of Artificial Intelligence and many other traditional 1 and 0 computational fields.

Last modified on 06 April 2018
Rate this item
(0 votes)
Tagged under
More in this category: « Samsung booms as chip sales slow AMD lost a key salesman to Lenovo »
back to top