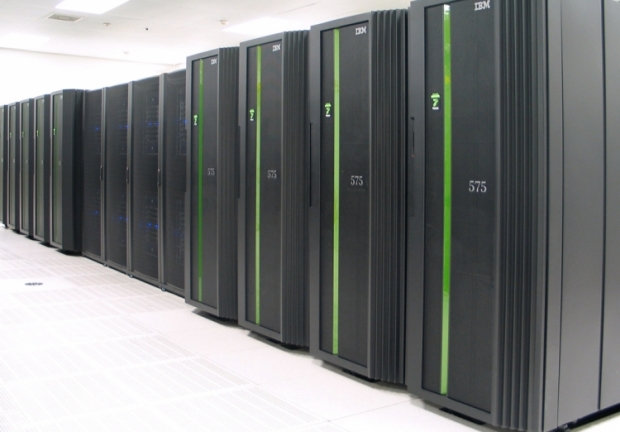 All your datacentres should belong to Big Blue

IBM is quietly confident that its new POWER chip can sweep ARM and x86 out of the datacentre market.

At the OpenPOWER Summit in Las Vegas, IBM was pushing its POWER9 and new OpenPOWER-based products.  Google has signed up POWER into "Google's Data Center" which is the most significant deal so far for OpenPOWER.

For those who came in late, the POWER architecture’s most significant advantage in the data centre is its acceleration capabilities- GPUs, FPGAs, DSPs, and ASICs with added memory coherence features. Add-in cards or chips on POWER architecture give machine learning, big data, security and networks workloads super-human powers over straight CPU acceleration.

The new POWER9 can manage Nvidia NVLink, OpenCAPI, and PCIe Gen4. It also has four times the number of threads per core and up to 9.5 times more memory bandwidth than x86 and was built from the ground up for big data, AI and ML workloads.

New POWER servers were announced at the summit, from consortium members Atos, Gigabyte, Hitachi, Inspur, Inventec, Rackspace, Raptor, Wistron, and others. Additionally, new OpenCAPI devices were announced from Alpha-Data, Amphenol, Cavium, Mellanox, Nallatech, Rambus, and Xilinx, which seek to capitalize on the significant memory bandwidth advantage of POWER9. Broadcom Limited, Eiditicom and NEC all announced new PCIe Gen4 devices, which they claim will accelerate compute, networking, and storage processes on OpenPower platforms. On the software front, the event also saw a slew of new OpenPOWER-compatible offerings from companies such as brytlyt, Elinar Oy, ISVs H20, MapD, and others, many of which are focused on AI and modern data workloads—POWER9’s bread and butter. I will be diving into the show to get details on all of these new offerings.

IBM's datacentre boast is not as unlikely as it sounds. Many large enterprises already use IBM’s Power Systems, even if it is not their main tool. IBM says 8/10 top retailers, 8/10 top insurance companies, 10/10 of the top Telcos, and 10/10 of the top banking firms run IBM Power Systems. Also, the company says 7/10 of Fortune 10 companies and 12/20 of the Fortune 20 enterprises run IBM POWER8 in their datacentres. But while the ARM is still a noob in the datacentre, really we are talking about seeing off x86.

Certainly, those who replaced x86 with POWER had a lot to say about it. Hyperscale datacenter provider Tencent says that since buying some OpenPOWER-based systems for its enterprise datacenter, its efficiency has improved by 30 percent, and it saved 30 percent on both rack resources and server resources.

Last modified on 20 March 2018
Rate this item
(0 votes)
Tagged under
More in this category: « Xilinx says computing after Moore’s Law is called ACAP AMD cuts some Ryzen and Threadripper CPU prices »
back to top