Linus explains why he prefers x86 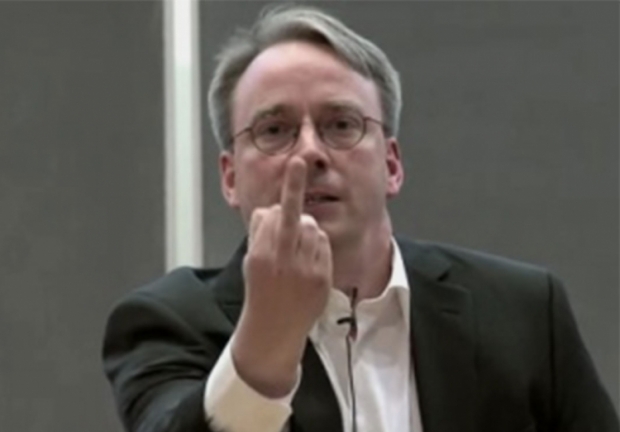 It’s Mr Sweary Linus Torvalds has been explaining why he is not a big fan of ARM chips.

At the Linaro Connect conference, when he was asked about his favourite chip architecture he surprised the weirdie beardies in the crowd by saying x86, not ARM.

He said that it might have been his long association with x86 but there is little fragmentation of software and hardware with x86, and things just work.

Torvalds said that people were too fixated with the instruction set and the CPU core, but it was all propped up by the ecosystem around the architecture that matters more.

He said that x86 has all that infrastructure, on many levels and is a lot more open in a way that no other architecture is.

A lot of application development happens on PCs with x86 chips from Intel or AMD. Compatibility matters for x86 chips and PCs, which have a unified model around hardware, development, and better infrastructure, he added,

ARM’s way of doing things leads to a fragmented market.

“Being compatible just wasn’t as big of a deal for the ARM ecosystem as it has been traditionally for the x86 ecosystem,” Torvalds said.

ARM dominates the mobile device market, and a majority of devices use Android, which is based on the Linux kernel. But there is a lot of fragmentation in the ARM ecosystem, and that’s caused support and device issues.

This means that it is not possible to make one build of Android that can be deployed across all mobile devices because of different hardware configurations.

Hardware makers tune Android to be compatible with chipsets in their devices. One Android update can’t be delivered to all mobile devices, unlike Windows updates to PCs.

ARM’s server software also has development problems. Architectural, networking, and I/O characteristics are different on each chipset, and software has to be written to exploit those features. That has significantly slowed down the adoption of ARM in servers. There isn’t a matching problem with x86, which continues to dominate the server market, he said.

In fact Linus said he was “pretty disappointed” with ARM as a hardware platform. He didn’t mind it so much as an instruction set, but he had his issues there, too.

“As a hardware platform, ARM is still not very pleasant to deal with.”

Last modified on 10 October 2016
Rate this item
(22 votes)
Tagged under
More in this category: « How good is Kaby Lake really? TSMC’s 7nm tech is on track »
back to top