AMD teases Beema SoC, or something rather

Hey give us a break, we're not sure either

AMD is playing around with the #AMDReveal hashtag and showing around teasers of what appears to be a SoC under a magnifying glass. No, we are not entirely sure what the ‘reveal’ is all about, but it’s almost certainly a SoC.

It looks a lot like a Kabini die and it is almost certainly a SoC. However, this does not mean AMD is teasing just another Kabini/Temash SKU. Chances are the company is teasing Beema, its next generation notebook SoC. Beema is already shipping to customers and the first products are expected in a couple of months, probably in time for Computex.

Beema and Mullins are all about lower TDPs

AMD has high hopes for Beema and Mullins SoCs, which are set to replace Kabini and Temash products this year. However, Kabini will probably stick around for a while, especially in the new AM1 platform.

We still don’t have any exact specs for Beema and Mullins for the time being. AMD has been dropping hints for a while, so we know a few figures. Beema is coming first and it will be available in 10W to 25W versions, so it should consume about 5W less than Kabini parts. Intel’s Bay Trail parts are quite a bit more efficient than Kabini/Temash, but AMD’s new generation should close the gap, at least in some segments.

Mullins will have a 2W SDP. AMD started using the unpopular SDP metric on some of its parts, namely on chips that go head to head with Intel SoCs that use the same metric. Mullins might even end up on a par with Bay Trail-T parts.

AMD expects the new parts to end up significantly faster than Bay Trail in the GPU department. The company says its new SoCs are about “250% better than comparable Bay Trail products.”

We’ve come to expect superior iGPU performance from AMD APUs, hence we aren’t surprised by the claim. Kabini and Temash parts feature 128 GCN cores clocked between 225MHz and 600MHz. AMD’s old Brazos parts featured 80 VLIW5 cores, so we are expecting to see either an increase in the core count or a substantial clock bump this time around.

CPU performance is the big question. Beema will employ new Puma cores, or Puma+ depending on who you ask. Not much is known about Puma, but it looks like a tweaked Jaguar core. Jaguar is tiny, just 3.1 mm2 per core. We doin’t know the size of AMD’s new Puma cores yet, but if AMD managed to optimize the design and save a bit of space, it could all go towards adding more GCN cores, which would explain the 250% claim. 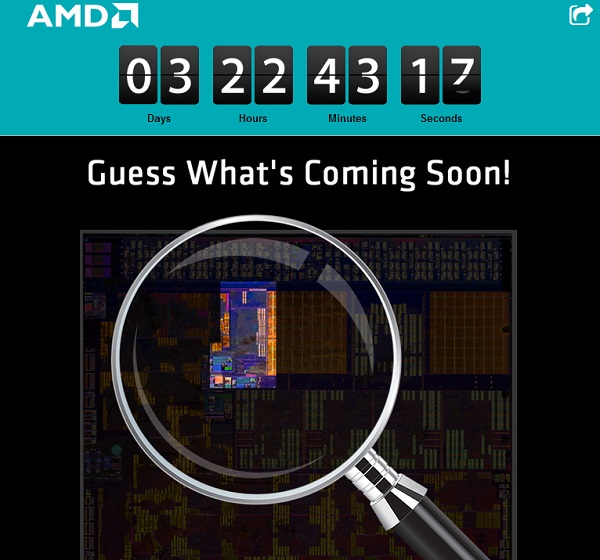 Jaguar offered a 15% IPC improvement over Bobcat, but it was an entirely new architecture. We don’t expect Puma/Puma+ to offer the same IPC gain over Jaguar, but AMD has surprised us before. AMD’s emphasis appears to be on reducing power consumption and boosting GPU performance, either by adding GCN cores or by bumping up clocks. Many Jaguar products can hold their own against comparable Bay Trail parts in terms of CPU performance, but they need quite a bit more power. This is especially true of Temash, as every milliwatt makes a big difference in tablet parts, making Bay Trail-T parts a lot more competitive. By reducing power consumption AMD should unlock more performance, especially in Mullins parts.

In other words, even though we don’t expect to see huge IPC gains, the overall performance should be significantly better, considering the tablet thermal envelope. We should know more in 3 days, 22 hours, 43 minutes and 17 seconds.