According to Lisa Su, SVP & GM, Global Business Units at AMD, Beema notebook parts have started shipping to manufacturers last quarter. The way this market works is that manufacturers get the final silicon a bit earlier so they can finish their designs and make the necessary adjustments. Once this process is done, they launch their notebooks or tablets based on a new APU/CPU.

We should see the launch announcement in Q2 2014 when AMD expects to see some partners launching their first Beema designs. Lisa Su confirmed this timeframe to the financial during AMD’s quarterly conference call, but Su didn’t reveal any additional details.

It is a 28nm product with 10W to 25W TDP that aims at low power essential and mainstream notebook markets. In the desktop world it will target essential and small form factor computers. Beema is also expected to replace recently socketed Kabini parts in the AM1 platform, but we still don’t have any timeframe for the AM1 update. Since the platform launched last month, we don’t expect any update soon.

If priced right, Beema could be successful in entry level to mainstream notebooks, as it should have decent graphics for some basic gaming, backed by a relatively powerful yet frugal CPU. Beema probably won’t deliver a huge performance gain compared to Kabini, but even the Kabini platform is powerful enough to run Windows 8.1 at 1080p and handle everyday tasks. 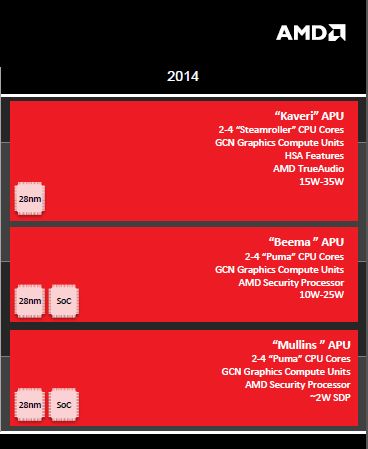