AMD’s new low-power Beema APUs are official and just as we expected the new parts are significantly more efficient than Kabini products. It’s not all about efficiency, the new chips also have some fresh features, but the basic concept is the same – up to four low-power CPU cores, 128 GCN cores.

AMD’s biggest selling point is efficiency, so let’s start there, right after we take a look at the branding of the new parts.

AMD has three new low-power Mullins parts and it also has new branding for the tweaked cores. Mullins parts can be distinguished from Beema products quite easily, as they sport a Micro prefix in their designation. 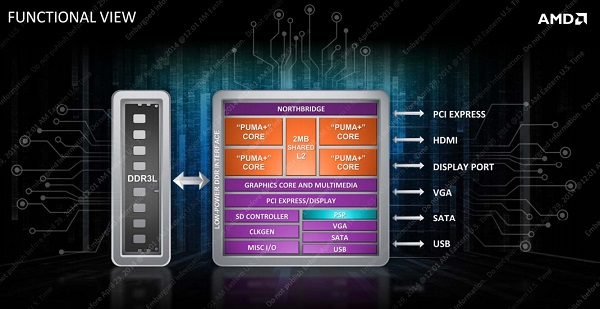 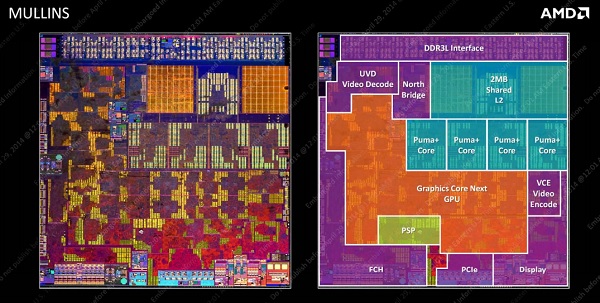 Compared with previous generation Kabini and Temash parts, the new APUs feature substantially lower TDPs across the range. Both CPU and GPU clocks have been bumped up. AMD did not add more CUs, so we’re still looking at 128 GCN cores, but the GPU clocks are quite a bit higher.

The basic approach is the same, so what did AMD do to boost efficiency and clocks? The company claims a 19% leakage reduction in the CPU department and a 38% reduction in the GPU. In addition, AMD tweaked thermal monitoring by taking more temperature readings on both the core and the package. This allowed designers to unlock higher frequencies, especially in boost mode, i.e. when opening websites, starting applications and so on.

Low-voltage parts aren’t meant for demanding applications, so the standard usage scenario does not involve more than a few minutes under full load. As a result AMD can afford to bump up clocks without negatively effecting the overall TDP, as the chips usually don’t run at the top clock long enough to make much of a difference. AMD calls its new trick Skin Temperature Aware Power Management (STAMP). The company claims STAMP can also extend battery life by completing tasks in less time, thus compensating for the extra energy expended at higher clocks.

AMD also tweaked its boost algorithms and power management. Thanks to reduced leakage, STAMP and other optimizations, Beema is about 20 percent more efficient than Kabini, so it allows AMD to squeeze more performance into the same thermal envelope.

AMD says the new parts offer a 10% GPU boost compared to the previous generation, with a twofold improvement in GPU performance-per-watt. AMD picked a few APU-loving benchmarks to compare Beema to Haswell and Bay Trail-M parts. The new APUs can beat the Pentium 3556U (Haswell) and the Pentium N3510 (Bay Trail) in PCMark 8, Basemark CL, 3DMark11. In the same test Mullins parts beat Bay Trail-T.

Naturally these benchmarks were chosen by AMD to prove a point, as they tend to like chips with snappier graphics and better OpenCL capabilities. In CPU-bound tests, the results should be quite different. While they don’t paint the full picture, the benchmarks are impressive, especially  when you consider the prices of Haswell Y and Haswell U parts. Furthermore, Intel needs two architectures to cover this market segment (Haswell and Bay Trail), while AMD relies on just one, with superior pricing.

Beema/Mullins is AMD’s first APU with a Platform Security Processor (PSP). This is basically an on-die Cortex A5 processor with dedicated ROM and SRAM. It also features a cryptographic co-processor capable of handling RSA, SHA, ECC, AES and a few other crypto standards. While PSP may not be a big deal for home users, it should come in handy for embedded applications. We will take a closer look at AMD’s PSP and a few other Beema features later.

Overall AMD appears to have done a rather good job. Beema was never meant to be a huge update, it’s evolutionary rather than revolutionary, but the efficiency gains are very impressive indeed. Kabini and Temash were good performers, but Bay Trail parts offered a lot more efficiency making them a better fit for many form factors (namely tablets and hybrids). Their biggest competitive disadvantage had nothing to do with performance, it was all about efficiency. With Beema and Mullins AMD has closed the gap, almost.

Rate this item
(0 votes)
Tagged under
More in this category: « AMD teases Beema SoC, or something rather Mullins can turn around AMD’s tablet fortunes »
back to top