Apple unveils the new A7 chip

In addition to the new 64-bit kernel iOS 7 as well as the iPhone 5S and the iPhone 5C, Apple has unveiled its new A7 SoC, which is actually the first consumer ARM-based SoC with 64-bit support.

According to Apple, the new A7 SoC consists of over 1 billion transistors on a 102mm2 die, which is actually twice what they had in the A6 chip. The chip will feature 64-bit desktop-class architecture with a modern instruction set, twice the amount of general-purpose and floating-point registers.

According to Apple, the new chip will be twice as fast as its predecessor, in both CPU and GPU performance. It also brings support for the OpenGL ES 3.0 that will be seen in the Infinity Blade III game launching alongside the iPhone 5S.

The iPhone 5S based on the new A7 SoC will be paired up with a secondary processor, the Apple M7 "Motion co-processor", which handles motion-sensing and motnitors data from the accelerometer, gyroscope and compass without draining the battery as heavily as well as offloading the main A7 SoC.

In any case, while everyone is talking about upcoming ARM's Cortex-A57 64-bit design, Apple has once again managed to come up on top of other manufacturers and be the first one to offer the first consumer smartphone ARM-based SoC with 64-bit support. 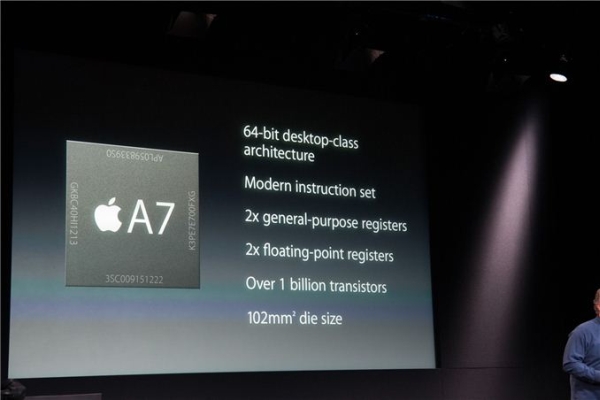 Last modified on 10 September 2013
Rate this item
(0 votes)
Tagged under
More in this category: « Quark family SoC one fifth of Atom Y-series Haswell ends up with manufacturers »
back to top