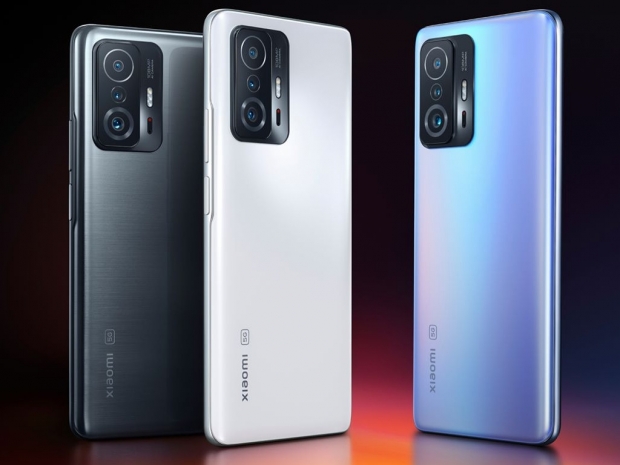 Xiaomi has showwd off its next-generation T-series flagship smartphones, the Xiaomi 11T Pro and the Xiaomi 11T, both featuring high-end chipsets, 108-megapixel main camera, large batteries, and plenty of other improvements - including a battery of press releases.

Less expensive than ots non-T counterparts, the Xiaomi T-series smartphones seem to have been quite popular and we are sure that the Xiaomi 11T series will share the same fate, or destiny especially considering what Xiaomi managed to pack into smartphones that carry cheaper price tags. 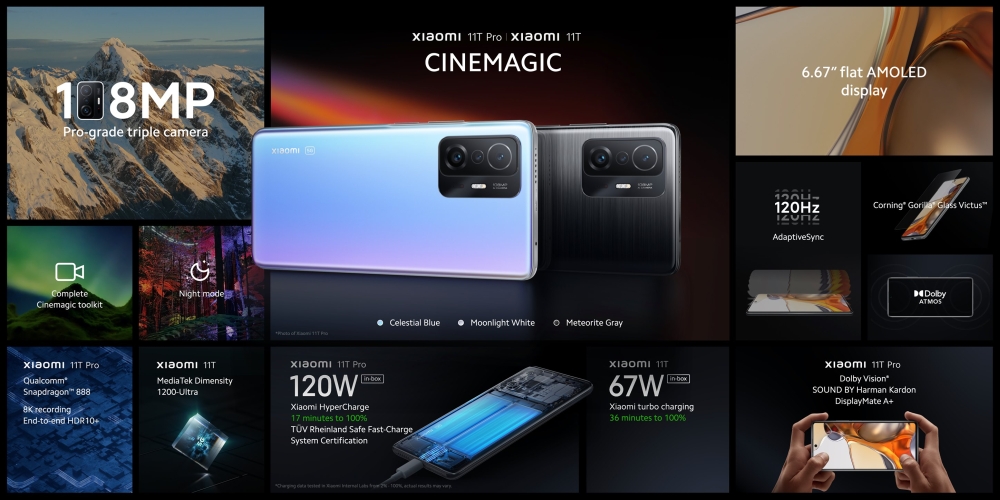 The Xiaomi 11T Pro is the new affordable flagship

Measuring 164.1x76.9x8.8mm and weighing in at 204g, the Xiaomi 11T Pro seems to pack punch and looks like it may be a proper flagship with Corning Gorilla Glass Victus front and Meteorite Gray, Moonlight White, and Celestial Blue color options.

The Xiaomi 11T Pro is powered by the Qualcomm Snapdragon 888 SoC, which is just a notch below the Snapdragon 888+ on the Mi 11 Pro. The Snapdragon 888 SoC is paired with 8GB or 12GB of RAM and 128GB or 256GB of UFS 3.1 storage. It uses vapor chamber cooling technology and comes with an x-axis linear vibration motor.

It comes with a smaller 6.67-inch flat AMOLED screen with 2400x1080 resolution, 120Hz AdaptiveSync refresh rate, HDR10+ support, 1000nits brightness, and 480Hz touch sampling rate. The scree got an A+ rating from DisplayMate. 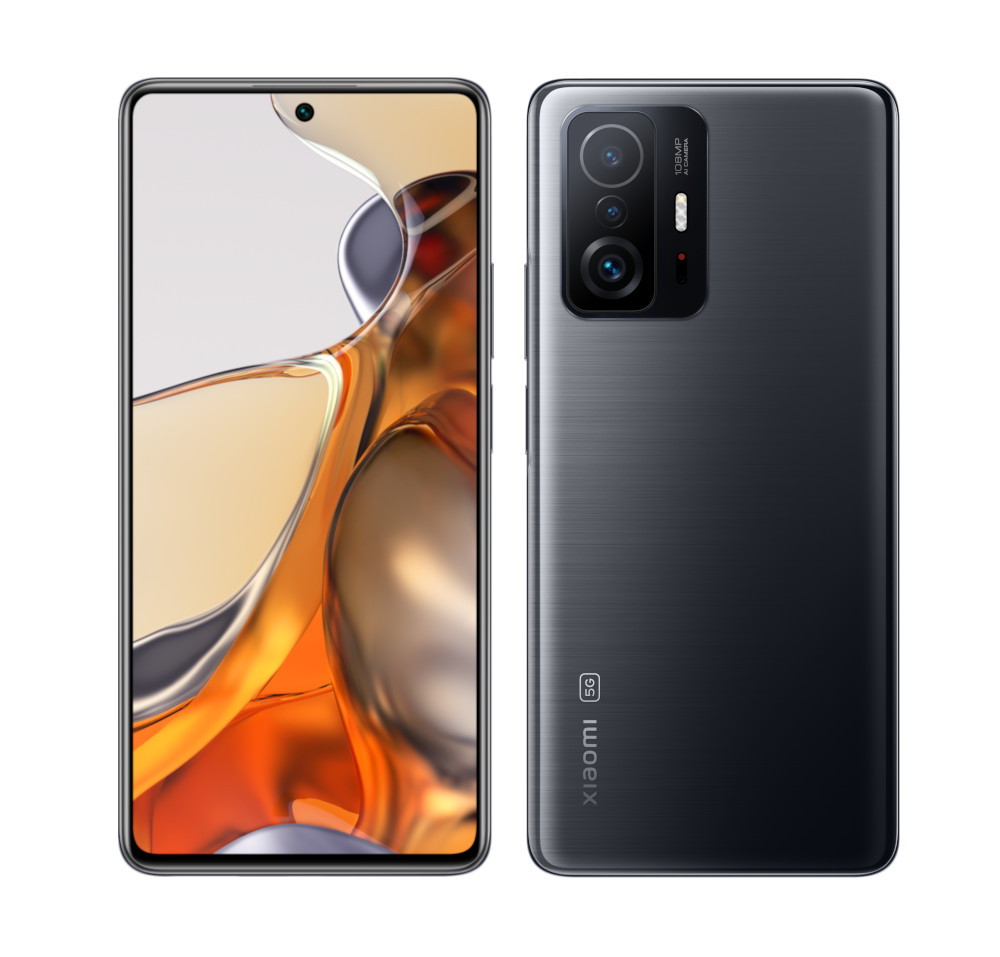 The camera can record both 8K and 4K HDR10+, and has plenty of high-end features, giving the Xiaomi 11T Pro good camera performance, especially when paired up with Snapdragon 888 ISP, it is claimed. 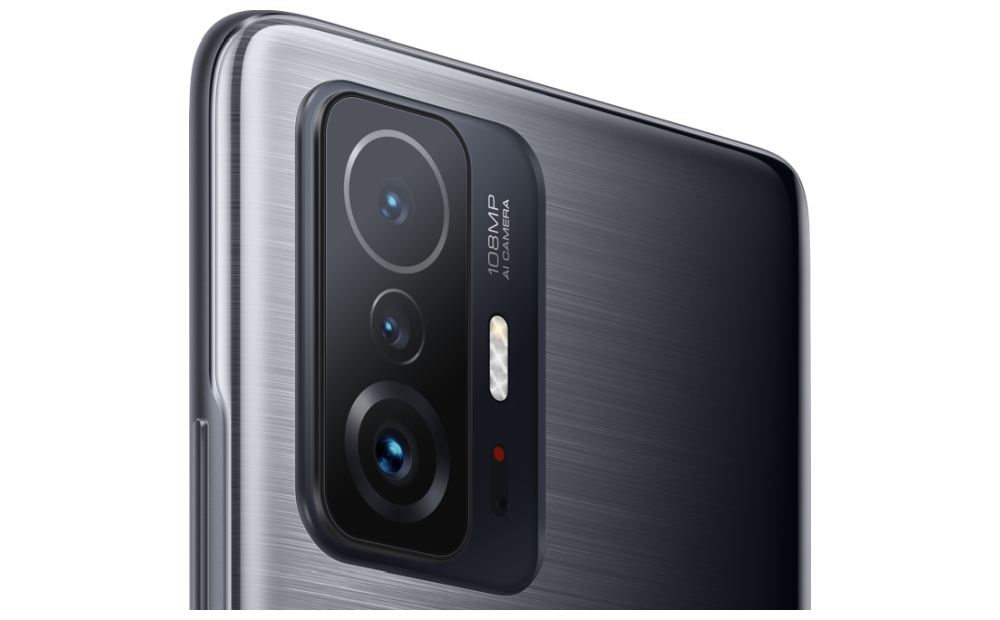 The rest of the features include dedicated dual speakers made in cooperation with Harman Kardon and support for Dolby Atmos, Type-C port, WiFi 6 and Bluetooth 5.2, NFC, and Arc side fingerprint sensor.

Another big win for the Xiaomi 11T Pro is the 5,000mAh dual-cell battery, and it will be paired up with Xiaomi's new 120W Xiaomi HyperCharge, which allows it to be charged up to 100 percent in just 17 minutes. 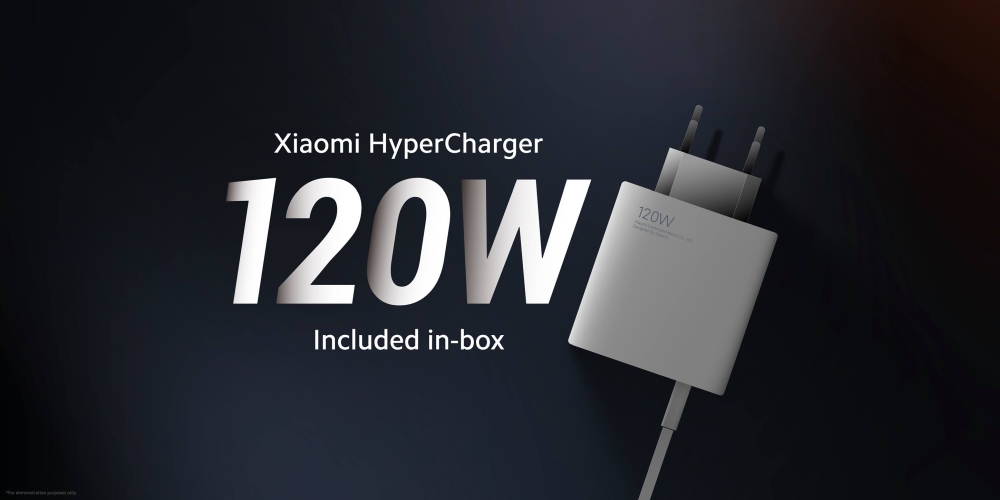 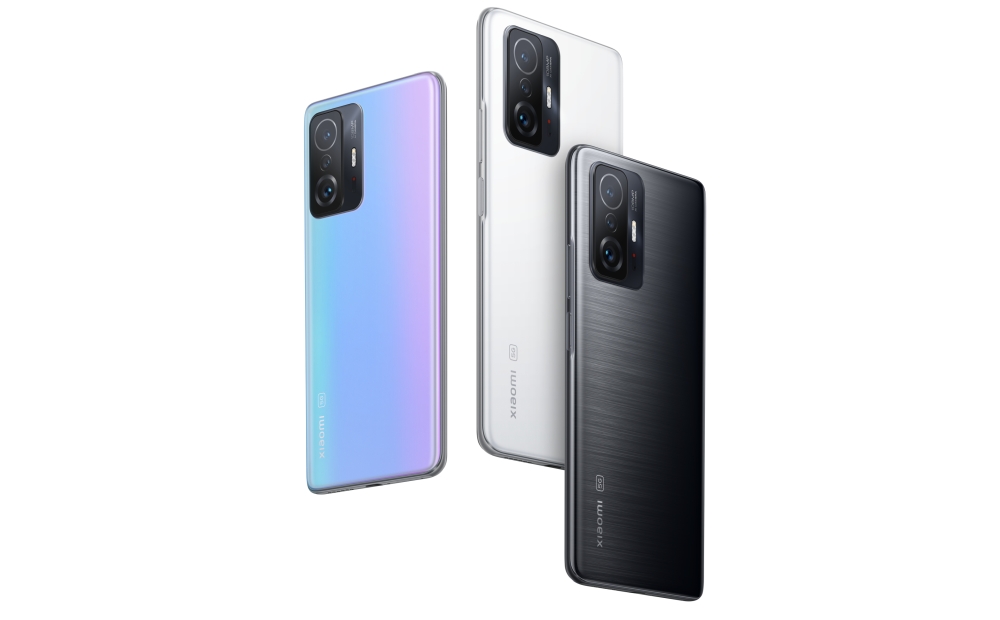 Measuring 164.1x76.9x8.8 and weighing in at 203g, the Xiaomi 11T is built around a 6.67” flat AMOLED DotDisplay with 2400x1080 resolution, 120Hz AdaptiveSync, HDR10+ support, 100nits brightness, and the same Corning Gorilla Glass Victus protection. It will also be available in Meteorite Gray, Moonlight White and Celestial Blue color options and it shares a lot of specifications with the 11T Pro. The company did not say what these shades of colours mean on the RGB scales. 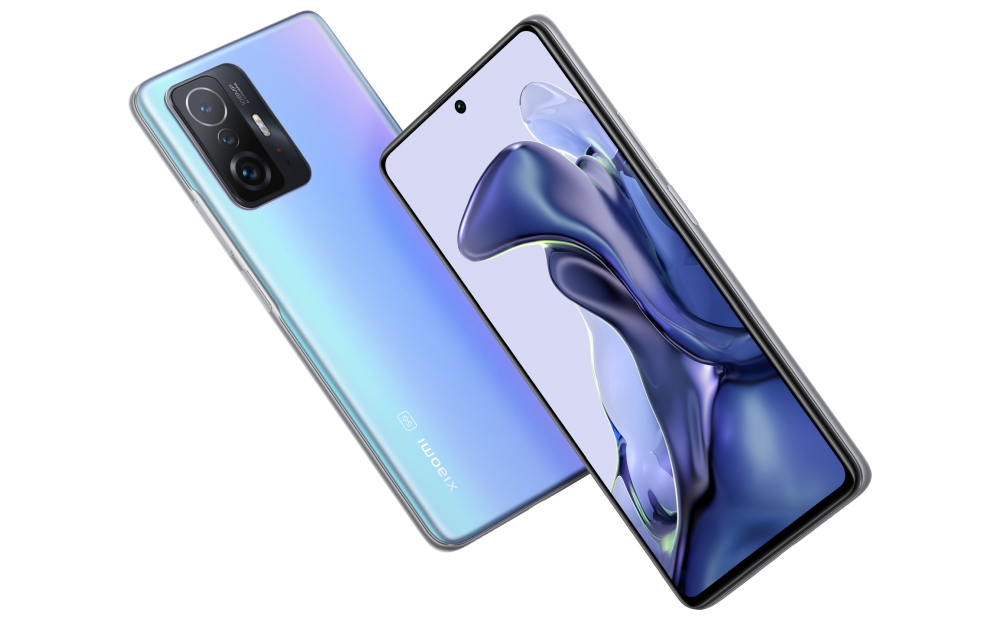 It pretty much has the same camera setup with 108MP main sensor, 8MP ultrawide one, and 5MP telemacro sensor, as well as an 16MP front one. The main sensor lacks OIS, but rather uses EIS with AF but the rest should be pretty similar. 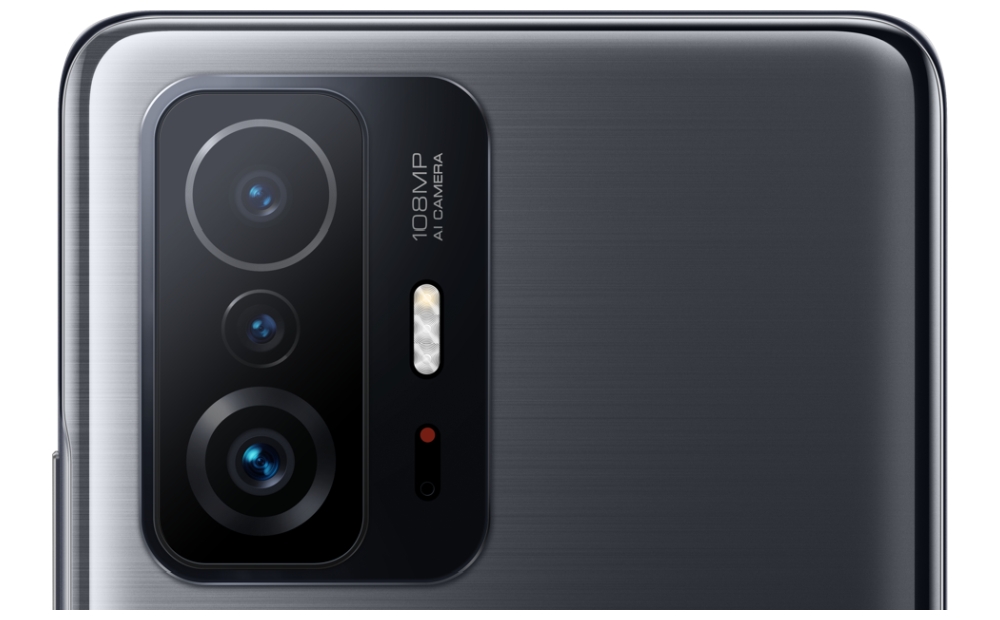 Xiaomi decided to use Mediatek's Dimensity 1200-Ultra SoC for the Xiaomi 11T, which is a custom 6nm chip from Mediatek with a 3.0GHz main core. It will be paired up with 8GB of RAM and either 128GB or 256GB of UFS 3.1 storage.

Unfortunately, the Xiaomi 11T does not have 120W Xiaomi HyperCharge support and charger, so it will stick to 67W wired charging, but the good part of the story is that it still has a 5,000mAh battery.

The Xiaomi 11T may be quite popular at €499 for the 8GB/128GB version and €549 for the 8GB/256GB version which pretty much hits the "sweet spot". It will be interesting to see if these will be as popular as their predecessors. 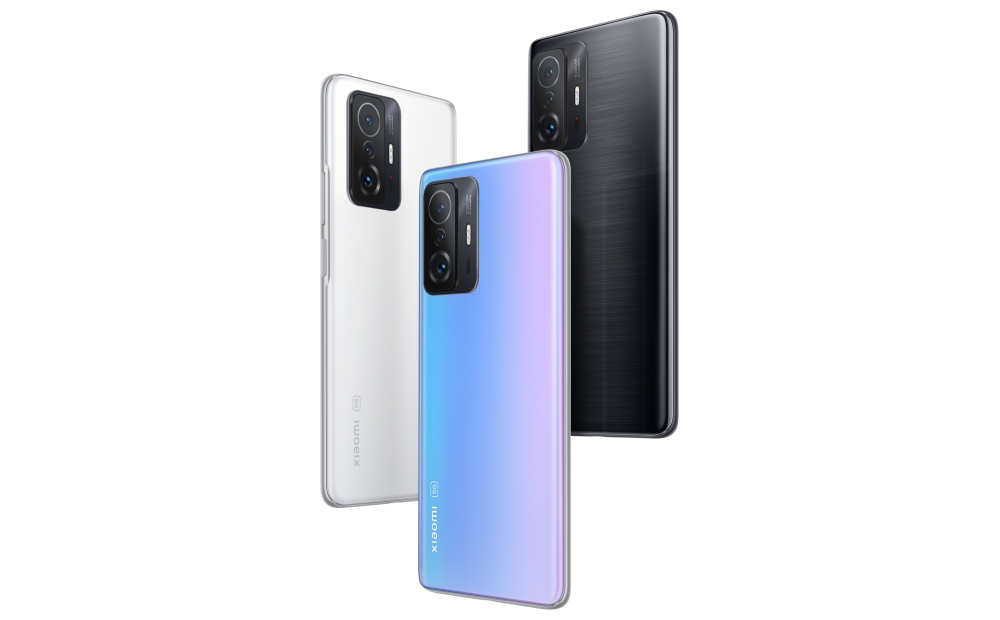