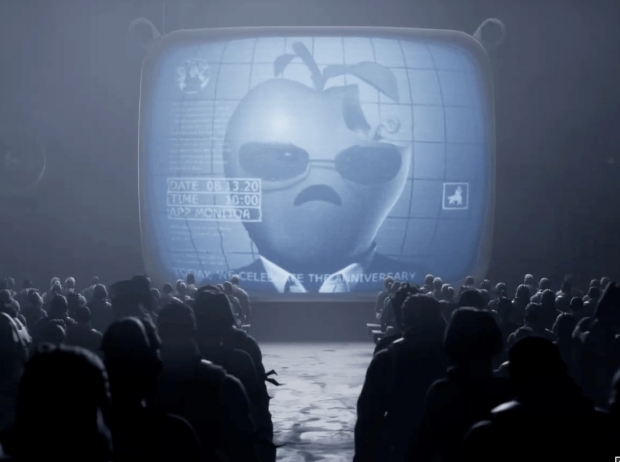 Fruity cargo cult Apple has stupidly engaged in a war with Epic – the makers of Fortnite.

While antitrust regulators are looking at Apple’s App store extortion racket and self-interested controls, it is fair to say that most Apple Fanboys would not have understood the problem.  After all what is wrong with giving a third of your income to Apple? Most of them do it anyway. And so what if Apps are not allowed to compete with Jobs’ Mob?

However, the game maker Epic has thrown Apple’s antitrust antics in sharp relief and in a way that explains the issue to Apple fanboys in a way they would understand.

Firstly Epic baited Apple in such an obvious way. It introduced a direct payments system into Fortnite’s iOS version daring Apple to ban the popular game. Apple could have thought about whether it was being set up, or if this was going to cause more trouble than it was worth, but it didn’t.

Epic is not seeking cash from this court for the injuries it says it has suffered. Nor is Epic seeking favourable treatment for itself, a single company. Instead, Epic is seeking injunctive relief to allow fair competition in these two key markets that directly affect hundreds of millions of consumers and tens of thousands, if not more, of third-party app developers.

On the iPhone, though,  Apple has chosen to make it different by imposing contractual and technical restrictions that prevent any competition and increase consumer costs for every app and in-app content purchase -- restrictions that it could never impose on Macs, where it does not enjoy the same dominance in the sale of devices, Epic ranted.

Apple has become what it once railed against: the behemoth seeking to control markets, block competition, and stifle innovation. Apple is bigger, more powerful, more entrenched, and more pernicious than the monopolists of yesteryear. At a market cap of nearly $2 trillion, Apple's size and reach far exceeds that of any technology monopolist in history.

But the matter did not stop with the court case. Epic is using its resources to make its case to the great unwashed too.

It made a video from  a #FreeFortnite website explaining its position.

A man with an apple for a face on a giant screen talks to a soulless, black-and-white audience. “Today, we celebrate the anniversary of the platform unification directives”, says the apple in a menacing voice. “For years, they have given us their songs, their labour, their dreams. In exchange, we have taken our tribute, our profits, our control. This power is ours and ours alone. We shall prevail.”

As he says that last line - which is also used in Apple’s ad - a woman throws a Fortnite pickaxe at the screen, invoking the classic image from the “1984” commercial of a woman throwing a hammer at the screen.

After the pickaxe shatters the screen, a message scrolls up: “Epic Games has defied the App Store Monopoly. In retaliation, Apple is blocking Fortnite from a billion devices. Join the fight to stop 2020 from becoming “1984.” And then, the hashtag #FreeFortnite appears.

More in this category: « Xiaomi Mi 10 Ultra camera overthrows Huawei on DXOMARK Samsung plans to move smartphone production to India »
back to top