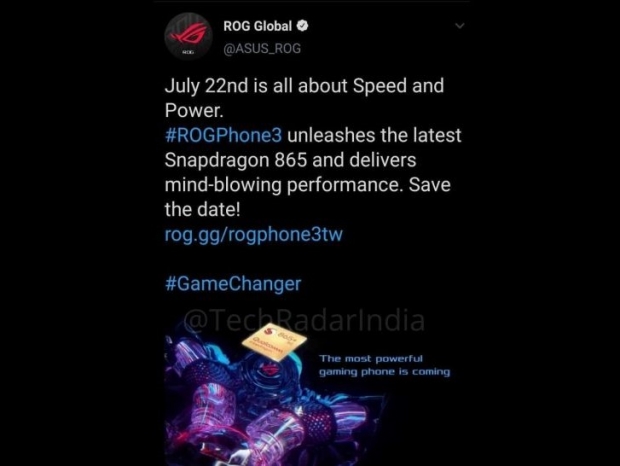 The Asus ROG Phone 3 might have an unannounced Snapdragon under its bonnet.

We had been expecting Asus to unveil the ROG Phone 3 later this month and a leak has confirmed that it will be powered by an unannounced Qualcomm Snapdragon 865 Plus.

A quickly deleted tweet suggested that it will be powered by the rumoured Qualcomm Snapdragon 865 Plus that hasn’t been announced yet.

This is particularly interesting as the SoC was previously rumoured to not even exist, but is now being talked about in the rumours for many upcoming devices.

It is believed to be a faster Snapdragon 865 with the prime performance core clocked at a slightly higher frequency.

The tweet, spotted by Tech Radar  (pictured) clearly stated “the latest Snapdragon 865” and the reference image also shows the Plus symbol.

Asus has always shipped the best possible chipsets on its ROG phones - sometimes in the form of a Plus model or by overclocking.

If the leaked Snapdragon 865 Plus benchmarks are to be believed, we’re looking at a peak frequency of 3.09GHz, followed by three Gold cores at 2.42GHz and four Silver efficiency cores at 1.8GHz. The GPU and modem capabilities might not change by much.

Asus might be looking to claim the bragging rights of being the first to the market with the Snapdragon 865 Plus chipset, but is soon rumoured to be followed by the Lenovo Legion gaming phone and the Samsung Galaxy Note 20 series.

The ROG Phone 3 - which is for gamers - might also be joined by the Asus Zenfone 7, which will be the next member in its mainstream flagship lineup.