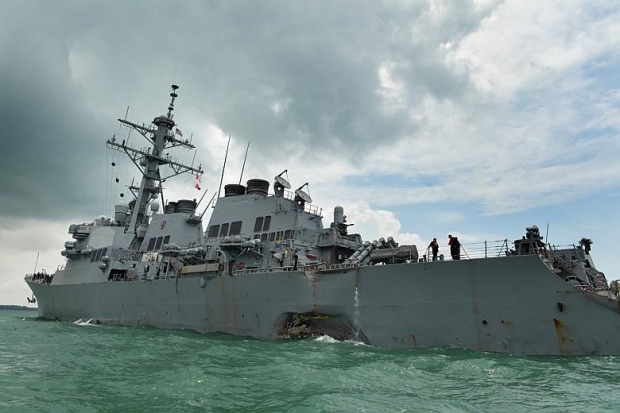 The US Navy has worked out that using touchscreens to run its throttle and helm controls on its destroyers was a dumb idea.

We guess it all made sense, after all, Steve Jobs said that touchscreens were “game-changing, super, cool, and the future of things”.  He stuck them in everything from phones to tablets.

However, the National Transportation Safety Board released an accident report from a 2017 collision, which cites touchscreen controls as a factor in an accident on August 21st, 2017, the USS John S. McCain collided with the Alnic MC, a Liberian oil tanker, off the coast of Singapore.

Crew members tried to split throttle and steering control between consoles, but lost control of the ship, putting it into the path of the tanker. The crash killed ten sailors and injured 48 aboard the McCain.

The report says that while fatigue and lack of training played a role in the accident, the design of the ship’s control console was also a contributing factor. Located in the middle of the McCain’s bridge, the Ship’s Control Console (SCC) features a pair of touchscreens on both the Helm and Lee Helm stations, through which the crew could steer and propel the ship.

The ship’s, touchscreen controls and procedures were overly complicated.

Investigators found that the crew had placed it in “backup manual mode”, which removed computer-assisted help because it allowed for “more direct form of communication between steering and the SSC”.

That setting meant that any crew member at another station could take over steering operations, and when the crew tried to regain control of the ship from multiple stations, control “shifted from the lee helm to aft steering, to the helm, and back to aft steering”.

Mechanical throttles are generally preferred because “they provide both immediate and tactile feedback to the operator”. The report notes that had mechanical controls been present, the helmsmen would have likely been alerted that there was an issue early on and recommends that the Navy better adhere to better design standards.

After the incident, the Navy conducted fleet-wide surveys to ask them if they thought touchscreens were “super, cool, and gaming changing”. What they found was most navy crews thought that they made simple working systems more complex.

Rear Admiral Bill Galinis, the Programme Executive Officer for Ships, personnel indicated that they would prefer mechanical controls. Speaking before a recent Navy symposium, he described the controls as falling under the “‘just because you can does not mean you should’ category”, and that ship systems were only too complicated. He also noted that they’re looking into the design of other ships to see if they can bring some system commonalities between different ship classes.

Last modified on 12 August 2019
Rate this item
(3 votes)
Tagged under
More in this category: « Huawei's Harmony operating system is not Android Huawei delays folding phone again »
back to top