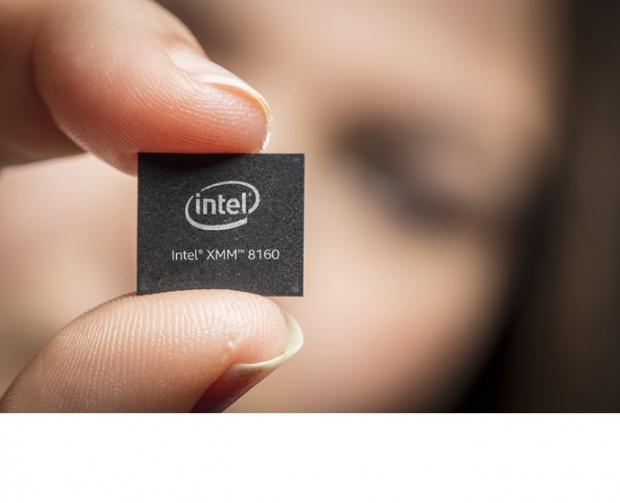 This is matching previous expectations as it was implied that Intel’s biggest and only modem mobile customer, Apple, won’t have a 5G solution in 2019. Still the announcement of the new XMM 8160 is confusing as Intel didn’t mention what happened with its first 5G XMM8060. To refresh your memory, Intel  announced the XMM 8060 5G for multi-mode and standalone network with 2G, 3G including CDMA and 4G legacy modes.

Some reports said that the 8060 was too hot for Apple and that might be the reason why Intel is announcing the second generation 8160 instead.

In November 2017, Intel claimed that XMM 8060 commercial customer devices can be expected in mid-2019 while the new 8160 suddenly has the same timeline. 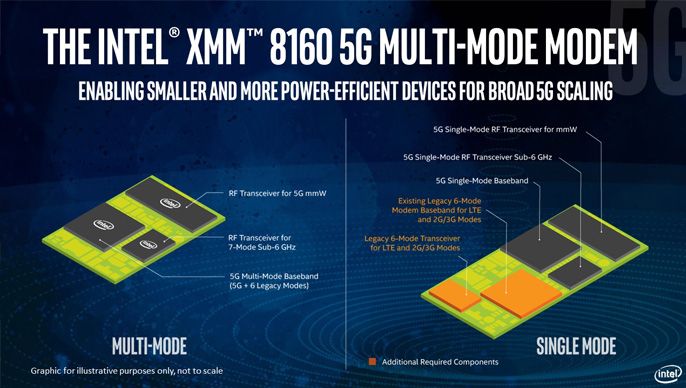 Intel even offered an illustration of benefits of the multi-mode versus single mode modem. In short, you need less chips and less space to do it, but all the Gs and transceivers for 2G, 3G, 4G and 5G have to come in three chips instead of five. If you look at the illustration - the multi-mode, the one that Apple is most likely to use, Intel can provide three chip solution -  RF Transceiver for 5G mmWave, RF Transceiver for 7-Mode Sub 6 GHz and 5G Multi mode baseband (for 5G and legacy modes). In single mode the 4G, 3G,2G transceiver and baseband come as separate additional chips, making the number increase to five.

Intel's press announcement clearly states improvement in power, size and scalability, all in a package that is smaller than a US penny. Intel didn’t disclose anything about its mmWave antennas and how they plan to put them in the device, but one can guess that this will be up to Apple to (not) share.

Intel promises download speeds up to 6 Gbps and PC partners have announced that they plan to use Intel 5G solution in their always connected 5G PCs at some point. Intel was contacted for official comment about the future of 8060 modem but at this time it looks like XMM8060 will end up beieng a test vehicle for the rea 8160 that will end up in iPhones.

Last modified on 14 November 2018
Rate this item
(0 votes)
Tagged under
More in this category: « Microsoft Surface Go LTE now available for $679 Snapdragon 8150 scores over 360k on Antutu »
back to top