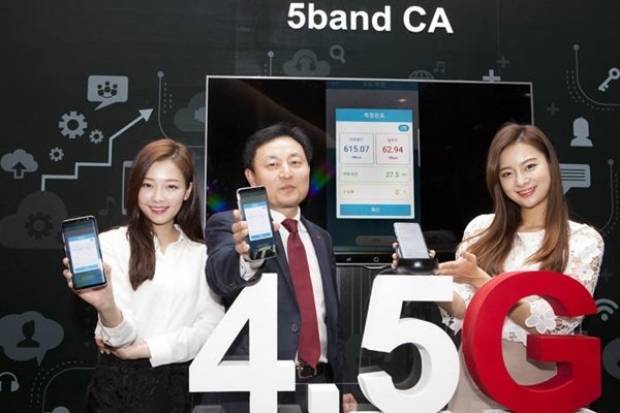 SK Telecom is Korea's largest wireless carrier and the company promised to start 5G trials in early 2018 and align with Fa ebruary start in Korea’s own PyeongChang 2018. Before that happens, the company is getting ready to roll out the 5-Band CA next month.

The 5-Band CA uses five different waves on a carrier and can get you to speeds of 700 Mbps. This is significantly better than the Cat 6 speeds that max out with 300 Mbps and represent a standard for the most advanced networks around the globe. This is what you have from US carriers at the moment, as well as most European advanced networks.

Back in January, Australia’s Telstra carrier launched the world’s first Gigabit LTE network and showed us the possibilities and speeds that we will be seeing with this technology.

Of course, SK Telecom needed to wait for the phone to support it as Galaxy S8 is the first phone capable of such support, at least the first phone with an Exynos chipset. SK Telecom is quoting some unrealistic theoretical numbers that the 5-Band CA (Carrier Aggregation) can download a 2GB movie in just 23 seconds, but this is a best case, purely theoretical number. In reality, it will take much longer, but it will still be much faster than any network today.

It uses the 256QAM on top of that. The secret ingredient missing for the Gigabit LTE is the 4x4 MIMO - something that Qualcomm supports on its modems and has yet to come to Exynos.

The service will launch in 23 cities including Seoul and metropolitan cities by the end of next month, and it will expand to 85 major regions by the end of the first half of this year. SK Telecom expects that the coverage of 5-band CA network will spread to 51 percent of population by the end of 2017.

This is the first time that SK Telecom confirmed that the Exynos powered Galaxy S8 can support 5-Band CA and there will be a firmware upgrade coming to this phone too.

“Although many are questioning the improvement in speed, mobile traffic has been increasing by 40% every year. We are going to provide optimal environment for content use through continuous improvement in quality of network.”

Qualcomm confirmed that it expects that 15 carriers around the world to launch GigabitLTE and SK Telecom will  get there in 2018. There is no doubt that the future will bring faster LTE connections and before we get to the 5G, increasing the speed of 4G is a top priority.

Last modified on 25 April 2017
Rate this item
(0 votes)
Tagged under
More in this category: « Galaxy S8 pre-orders are 30 percent higher Sony Xperia XA1 pre-orders are up »
back to top