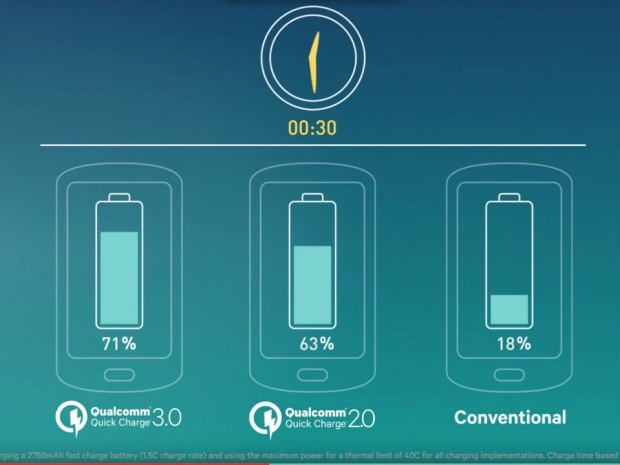 Even faster charging speeds in 2017

Qualcomm's Snapdragon 830 is just around the corner and it will support fast charging speeds of 28W. The technology is called Quick Charge 4.0 and the information comes from an accessory manufacture that wants to remain silent.

Many people, especially iPhone users, won’t admit the importance of fast charging but there are phones with Quick Charge 3.0. Our sources imply that the new charger could support all the way to 5V/4.7A~5.6A, 9V/4A or similar configurations.

This of course means that Qualcomm found a way to feed more power to the battery in the next generation Snapdragon devices without damaging it. Quick Charge 3.0 provides flexibility with 200mV increments from 3.6V to 20V. The technology intelligently identifies the exact amounts of power your device battery can take at any given moment. You probably  know that one of the key issues with lithium based batteries we all used in modern phones is that they can get damaged by overheating. Quick Charge prevents that  by lowering the energy that gets fed to your phone when it heats up.

Quick Charge 4.0 with 28W will take things to the next level. It can theoretically charge even bigger batteries faster. The key is the INOV (Intelligent Negotiation for Optimum Voltage),  a technology that fine tunes the device charging.

Quick Charge 3.0 can change a 2750 mAh battery from 0 to 71 in 30 minutes and since the late 2016 phones including Google Pixel have the same battery size, you can  expect that they will charge even faster. The troubling thing is that the battery charging goes quite fast up to 80 percent and then the last 20 percent takes as long as the rest of the phone. That  can be sped up but only incrementally.

Phones supporting this technology are expected to launch in Q1 2017, whenever the first vendor announces a Snapdragon 830 device. Remember, earlier this year LeEco announced Le Max Pro, the world’s first Snapdragon 820 based phone. The rest of the usual suspects, incuding Samsung, HTC, LG, Xiaomi and many others will follow at the Mobile World Congress 2017 in the last days of February next year.

Last modified on 14 November 2016
Rate this item
(6 votes)
Tagged under
More in this category: « Samsung has got 85 percent of its Note 7s back Huawei Mate 9's 22.5W super charger is super-fast »
back to top