Apple announces iPhone 7 and iPhone 7 Plus 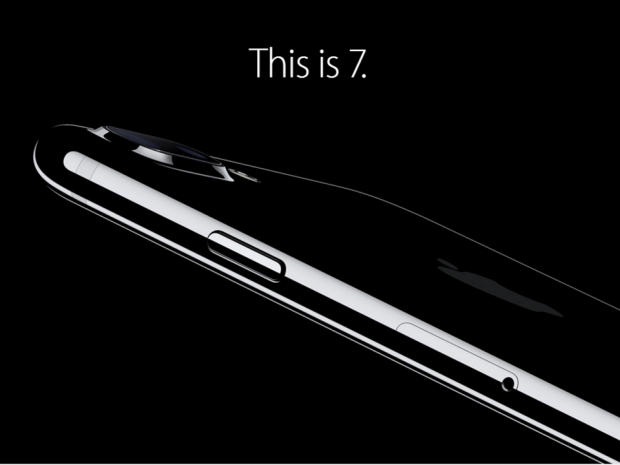 On Wednesday morning, Apple took the wraps off its tenth-generation iPhone lineup, now formally known as “iPhone 7” and “iPhone 7 Plus”.

The devices feature the same 4.7-inch and 5.5-inch Retina HD displays as previous iPhone 6 and iPhone 6S lineups but now use an improved, more power-optimized Apple “A10 Fusion” processor and hold the longest battery life of any iPhone lineup yet.

The company actually filed patents for the names “iPhone 7” and “iPhone 7 Plus” on June 17th, confirming the names of its tenth-generation smartphone devices well ahead of time, at least to those interested in patents and trademarks. While this information may have been particularly useful to the onslaught of rumor mill columns these past few months, many sites still referred to the products by these names well before the company’s formal announcement. 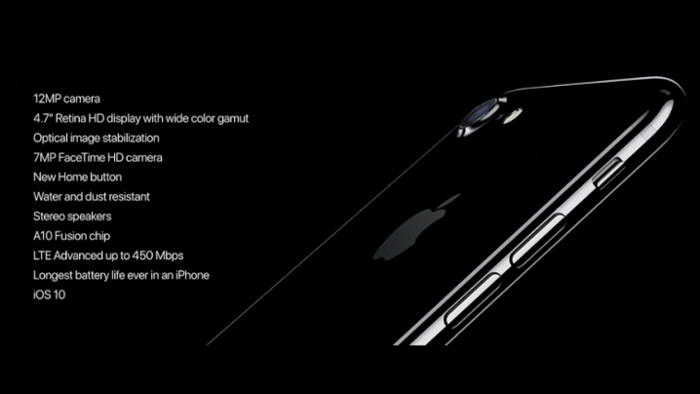 Phil Schiller, Senior VP of Worldwide Marketing took the stage for another iPhone product demonstration that highlighted two devices with a design largely unchanged since the iPhone 6 in 2014. The new iPhone 7 and iPhone 7 Plus feature the same aluminum unibody finish as the previous devices, but there is now a “Jet Black” color option with a glossy finish alongside three matte finishes – Silver, Black, Gold and Rose Gold. The company has replaced the previous “Space Grey” option with Black.

The devices feature splash, water and dust resistance through the IP67 rating, which guarantees water resistance for up to 30 minutes. 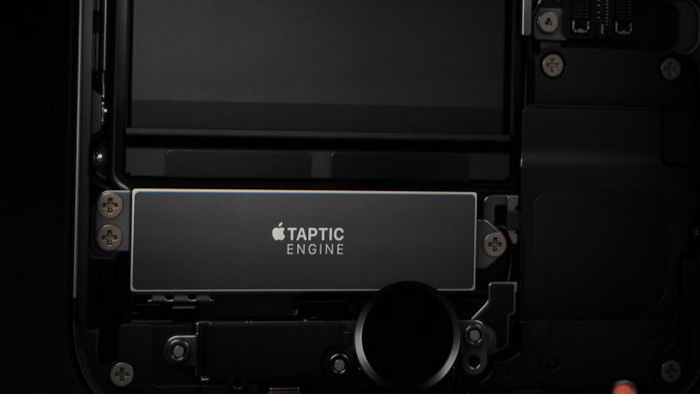 The new devices now feature solid-state Home buttons with force-sensitive touch, which means they are not actually physical buttons. The concept, which Apple first introduced with the iPhone 6S display, allows sensors within a “Taptic Engine” unit to determine how hard a user is pressing on the button, and then trigger various software commands with varying amounts of force. It is possible that Apple had to adopt a haptic design to make the devices IP67 water-resistant, and to improve durability for those customers often needing their clickable buttons replaced.

For example, the Home button will be able to activate Quick Actions, Messages, Notifications and Ringtones depending on how hard it is pressed and in which direction. So far, an early hands-on reviewer has mentioned that “the entire bottom of the phone feels like it’s clicking” when commenting on the new design.

Both the iPhone 7 and iPhone 7 Plus have been given notable camera upgrades from their predecessors, but this year Apple has given emphasis to the iPhone 7 Plus camera functionality for its incorporation of dual lenses, one for telephoto zoom and one for wide-angle photography. 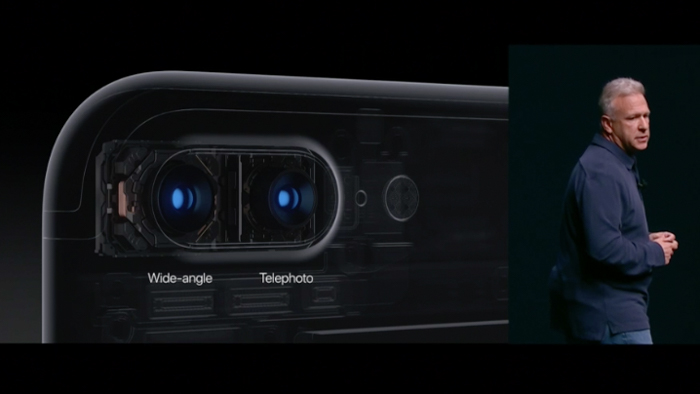 Apple has designed a new rear camera ISP for both devices (including both iPhone 7 Plus rear lenses) featuring an f/1.8 aperture that was previously f/2.2, and a six-element lens design that was previously a five-element lens. The new six-element lens allows up to 50 percent more light to pass through to a 12-megapixel sensor that features larger pixels. The company claims that the new design is also 60 percent faster and 30 percent more energy efficient. Apple has also included a flicker sensor for artificial lighting situations that automatically adjusts shutter speeds to avoid the flickering sensation of indoor lights.

The iPhone 7 Plus uses the improved 12-megapixel design for both its telephoto and wide-angle lenses. The telephoto lens can provide up to 2x optical zoom and 10x digital zoom, while the iPhone 7 provides up to 5x digital zoom. The front cameras on both devices have also been upgraded to 7-megapixels with an f/2.2 aperture and 1080p video recording.

Although the larger device gets telephoto zoom capability, the camera lenses on both the iPhone 7 and iPhone 7 Plus include Optical Image Stabilization (OIS), a feature that was previously only available on the larger iPhone 6 Plus and 6S Plus. Later this year, the company intends to release a "Depth Effect" software update to add the ability to create real-time image effects by building a depth map of each frame before a shot is taken.

The functional unit now responsible for iPhone 7 and iPhone 7 Plus operation is the company’s new A10 Fusion chip with M10 motion coprocessor. As mentioned last year, the A10 is likely based on a 16nm process node from TSMC using its new Integrated Fan-Out (InFo) wafer-level packaging (WLP) fabrication method combined with a FinFET process. These methods allow TSMC to reduce package height and remap pins to the PCB with shorter lengths, enabling about a 20 percent improvement in chip performance and about 10 percent in thermal performance. 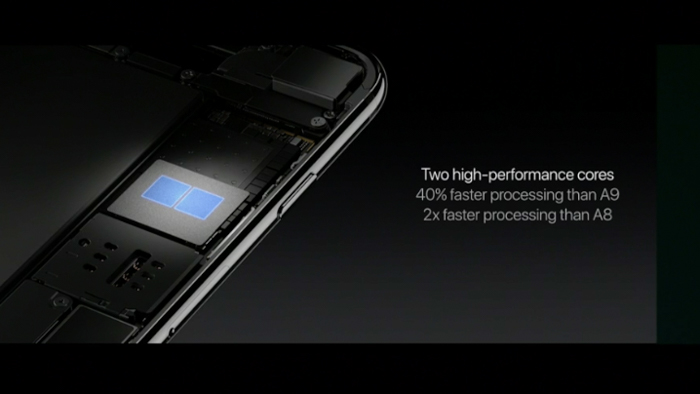 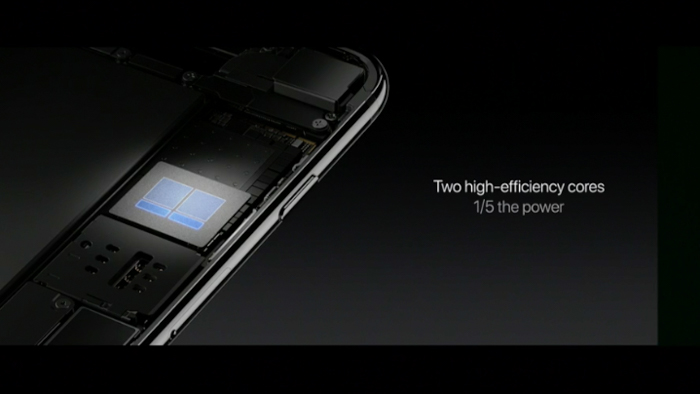 This is a four-core CPU with 3.3 billion transistors that now takes a page from ARM’s big.LITTLE architecture by featuring two “high-performance” cores for heavier workloads and two smaller “high-efficiency” cores operating at one-fifth the power of the larger cores. All of the process and execution exchanges are handled through a proprietary Apple performance controller. The two larger cores feature 40 percent more performance over the dual-core A9 1.85GHz based on TSMC 16nm / Samsung 14nm processes (iPhone 6S), or twice the performance of the dual-core A8 1.1GHz based on the TSMC 20nm process (iPhone 6).

Meanwhile, the company claims graphics performance has tripled since the A8 in the iPhone 6 lineup and is 50 percent faster than A9 in the iPhone 6S lineup. In terms of power efficiency, new GPU runs at half the power of the A8 from two years ago, at two-thirds the power of last year’s A9.

Both devices retain the same 1334x750 and 1920x1080 Retina HD displays from the iPhone 6 / 6 Plus and iPhone 6S / 6S Plus, but with some improvements to color accuracy and brightness. The first improvement is an upgrade to 625cd/m2 brightness, and the second is incorporation of the wider-gamut DCI-P3 color space standard common in cinemas and digital movie projections. The displays also now use “dual-domain pixels” for wider viewing angles, similar to the 9.7-inch iPad Pro that launched earlier this spring. 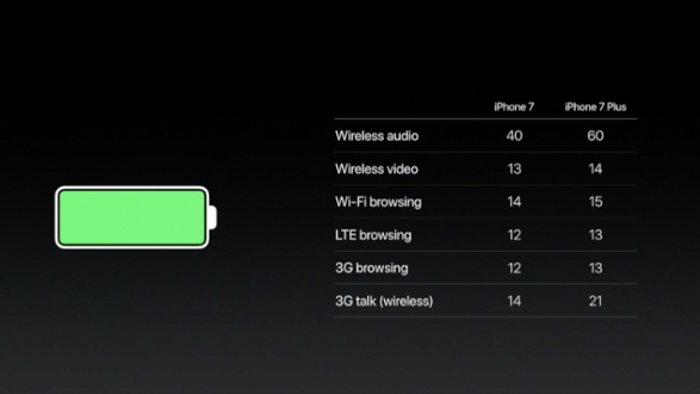 Despite claiming to have “the longest battery life of any iPhone launch,” the iPhone 7 and iPhone 7 Plus make improvements in some categories while falling behind previous devices in others. For example, in terms of 3G calling time, the iPhone 7 gets 14 hours, the same as the iPhone 6 and 6S, while the iPhone 7 Plus gets 21 hours, down from 24 hours on iPhone 6 Plus and 6S Plus.

In terms of Wi-Fi browsing, however, the iPhone 7 gets 14 hours while the iPhone 7 Plus gets 15 hours. This is up from 11 hours on iPhone 6 and 6S and 12 hours on iPhone 6 and 6S Plus. The company has also changed its audio listening battery metric from “wired audio” to “wireless audio,” claiming 40 hours of wireless listening time for the iPhone 7 and 60 hours for the iPhone 7 Plus. Notably, however, the new wireless audio listening metrics are not easily comparable to the company’s previous slides showing battery performance for wired audio playback.

Once and for all, Apple has decided that its proprietary Lightning connector that was introduced in 2012 should somehow become a standard  for all consumer electronics companies developing digital audio peripherals in the future. During his keynote, Senior VP of Marketing Phil Schiller gave a brief overview of the history of how the 3.5mm audio port has been a standard but can now be replaced to make way for wireless earphones and other newer digital peripherals. More interestingly, he explained that the company’s reasoning for ditching the standard was three-fold, with the primary word to define it being “courage”.

First, he explained that with every new device, competing for every square millimeter of space on new designs is critical to the success of a product. Second, the switch was important to make way for Apple’s proprietary wireless audio standard – competing with Bluetooth, that is more power-efficient and uses its new W1 chip for wireless EarPods. The third reason was simply that the company could not justify keeping an “ancient” single-use port onboard when its new peripheral devices require some multi-purpose data signaling channels.

Needless to say, and perhaps most importantly, the company has decided it will include a Lightning to 3.5mm adapter in the box of every new iPhone 7 and iPhone 7 Plus device. We certainly hope that also applies to its next iPhone launches as well.

Jet Black will be available exclusive to the 128GB and 256GB models, and the reasoning is likely because it might be a popular color option.

The devices are set to become available for pre-order on Friday, September 9th at 12:01am PST. They will be available to purchase, depending on availability at particular carriers of storage and color options, on September 16th.