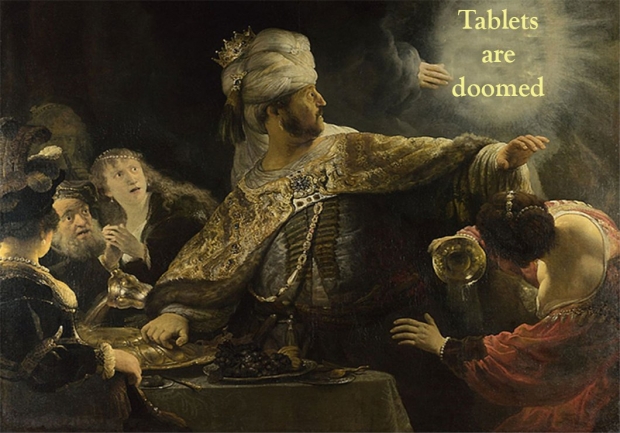 Writing on the wall

Beancounters from Digitimes Research claim that white-box makers of the keyboardless netbooks only sold 13.8 million units in the second quarter.

Part of the reason was because the quarter was a slow season for North America and Europe and there is little demand from emerging markets which also remained weak due to economic downturns.

In some ways that was probably just as well. If the tablet market had spontaneously risen from the dead, many white box makers would have been in deeper trouble. The report describes an industry blighted with component shortages and rising component quotes. Some white box ODMs were unable to fulfil some orders and were forced to delay orders to the second half of the year.

Orders for entry-level Wi-Fi-only tablets from mature markets such as Europe and North America declined during the second quarter, while demand for tablets with phone functionality also decreased in emerging markets due to exchange rate fluctuations and weak economies.

Some white box players turned their focuses from the 7-inch tablet market to the 8-inch one due to the fierce price competition in the 7-inch market. Tablets with 10-inch and above displays saw their shipment share rise to 28 percent in the second quarter,  mainly because demand for 2-in-1 devices has been rising.

Intel has already given up developing mobile device-specific AP units, but increasing demand for Windows 2-in-1s will help offset the drop and maintain the shipment share of white box players' Intel-based tablets, the report said.

Last modified on 10 August 2016
Rate this item
(1 Vote)
Tagged under
More in this category: « Samsung working on 10nm SoC Qualcomm CEO claims it leads in 5G »
back to top