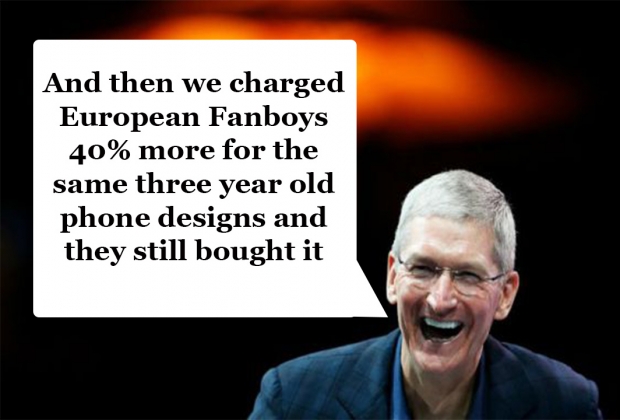 Fruity cargo cult Apple has decided that Europeans should pay more for the three year old iPhone SE designs than the rest of the world.

This week Apple released its undersized iPhone SE, which has the same design as the three year old iPhone 5S which it is moth-balling. However it seems that Apple is punishing any European fanboys dumb enough to buy the phone by jacking up the price by 40 per cent.

The 64GB iPhone SE price is set at €590, which translates to $663 U.S. dollars. Compare this to a $500 price for the iPhone SE in the United States, and you'd see that the price premium for this version stands at some 33 per cent.

The reason for this? Well Apple is not saying but perhaps it is a punishment for the EU daring to question its tax dodges in Europe and demanding that it pay its tax like normal people. Apple has been stitching up its European fanboys for a while now. The iPhone 6s price in Germany starts from €745 for the 16GB model, while in the United States the same version costs $650.

Of course punishing your customers for buying your product is probably one of the reasons that Samsung does so well. The Galaxy S7 official retail price is around $700 in the United States, and it's €700 in Europe.

You would think if you were losing sales and trying to sell a three-year-old phone design with an undersized screen in a competitive market you might like to at least try to make it a bit cheaper. We guess Apple does not think that way – either that or Tim Cook had a dodgy takeaway once in Europe and hates Europeans.

Last modified on 23 March 2016
Rate this item
(18 votes)
Tagged under
More in this category: « HTC 10 smartphone announcement confirmed for April 12th Meizu PRO 6 scores 6699 in Geekbench »
back to top