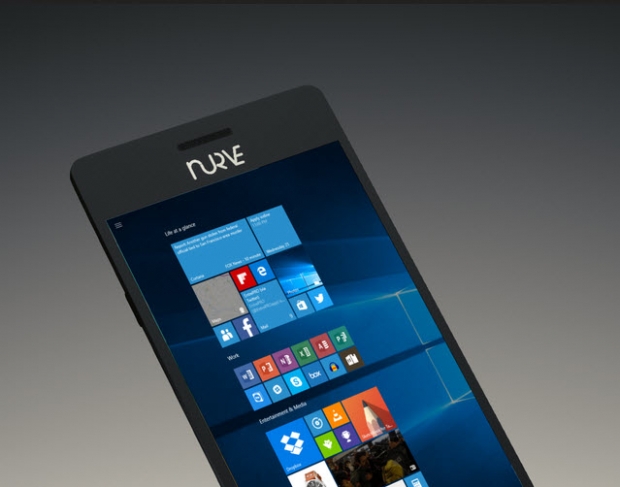 The Nurve of putting Windows 10 in a phone

Nurve Technologies is trying to create a SyncPhone which runs Windows 10 and aims to bridge the gap between the smartphone and the PC.

The 5.4-inch SyncPhone phone runs any application you use on your laptop or desktop, and has access to all the apps in the Windows Store. It will have a 64-bit Atom chip with desktop architecture packed up in a textured aluminum uni-body.

The device will also have a MicroSD slot, Dual-LTE-GSM, WiFi capabilities, and will come unlocked, so you can use it with any carrier.

So far it is an ordinary phone, but it comes with a kickstand and a detachable keyboard which you will have to buy separately. The SyncPhone S and Pro will come with a stylus that can be stored in the device.

Nurve  says that its SyncPhone will offer perfomance comparable to the Microsoft Surface 3 tablet.

The team plans to have the phone run three different operating systems and if its Indiegogo campaign reaches a million dollars then it will offer a dual-boot function with Android and Windows 10.
“If we reach two million, we’ll do the same with Ubuntu Mobile. If we reach three million, we’ll love you guys forever.”

Actually they appear to be covering the same ground that the Ubuntu Edge promised. That beastie did not reach its goal of raising $38 million. The SyncPhone’s campaign just started, and as of publication time, it hasn’t raised any of its $750,000 goal.

The retail price of the basic SyncPhone will be $279, the S will be $390, and the Pro will set you back $700. The campaign offers early adopter prices.

More in this category: « Zenfone gives Asustek part of smartphone market Christmas slows down your Wi-fi »
back to top