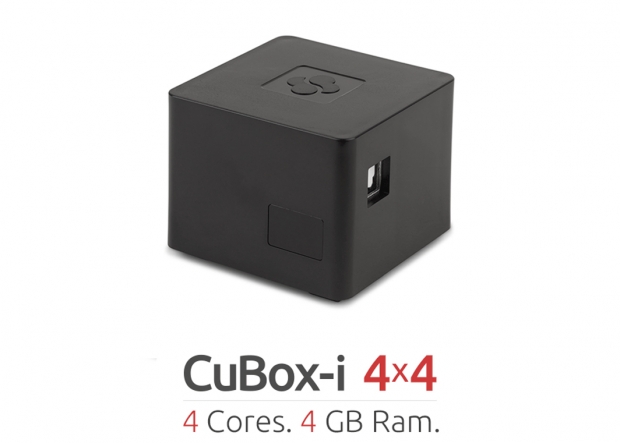 Israeli outfit SolidRun has added a a 2 x 2 x 2-inch Cubox-i 4X4 to its line claiming that it is the world's smallest ARM quad core 4GB minicomputer.

The nearest in size is the Ugoos's UT3 and UT3S mini-PCs which are eight times larger, at an estimated 5 x 5 x 1-inches.

According to LinuxGizmos SolidRun's website currently lists 2GB as the maximum RAM available on the MicroSOM, but the CuBox 4X4 is built around a 4GB version of the MicroSOM.

SolidRun's CTO, Rabeeh Khoury, said that only 3.8GB of the RAM might be accessible but it will supports full HD multi format video decoding at over 100Mbps bit rate, as well as encoding of Full-HD video streams, says SolidRun.

There are gigabit Ethernet ports but the 1000Mbps link is limited to 470Mbps actual bandwidth due to internal chip buses limitation. It has a WiFi 802.11b/g/n; Bluetooth 4.0 and HDMI 1.4. There is an Optical audio SPDIF out and InfraRed receiver and transmitter with 2x USB 2.0 hosts.

Last modified on 30 April 2015
Rate this item
(2 votes)
Tagged under
More in this category: « Windows phones to support Android and iOS apps Apple and IBM flog iPads to elderly Japanese »
back to top