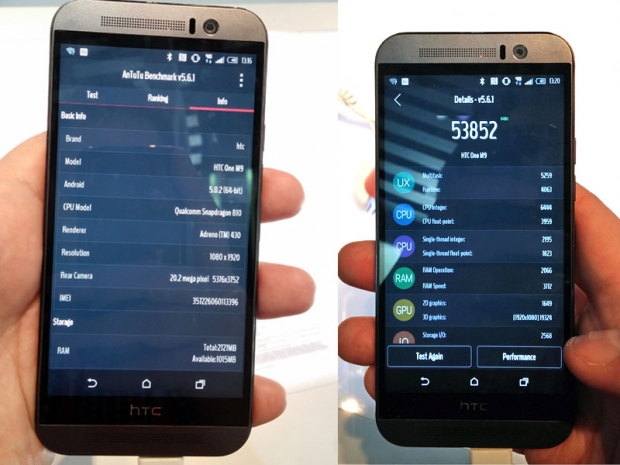 We had a chance to run AnTuTu on Qualcomm’s Snapdragon 810 in the HTC One M9, and we managed to run the latest and greatest 64-bit version of the test.

After a few minutes the phone scored 53852, thanks to its quad Cortex-A57 clocked at 2.0 GHz and quad Cortex-A53 clocked at 1.5GHz, backed by new Adreno graphics. The metal phone gets slightly hot, but it was stable at all time.

This is just one test and we hope to be able to spend a bit more time with Snapdragon 810 products very soon and then we will be able to give you a more conclusive report about this new flagship SoC.

The Snapdragon 810 was shown off at the Mobile World Congress in only two phones, HTC One M9 that launched last Sunday, and LG the G Flex 2 that launched back in January at CES. We have managed to see the Samsung Galaxy S6, but did not have a change to benchmark it.

Rate this item
(1 Vote)
Tagged under
More in this category: « Huawei will get the next Nexus deal LG set to release super flagship »
back to top