Techradar.com managed to get their hands on the official release date and price for the UK launch of the Asus Fonepad, a 7-inch, Intel Atom based tablet that has full phone and 3G HSPA+ support.

According to Techradar.com, the new Asus Fonepad might be the real Nexus 7 killer considering that it packs some impressive specs, full 3G capabilities with phone support and most importantly, an impressive £179.99 price tag. For comparison sake, the Google Nexus 7 16GB WiFi-only actually has exactly the same price tag.

In case you missed it, the Asus Fonepad is based on Intel's Lexington single-core (dual-thread) Atom Z2420 clocked at 1.2GHz and paired up with PowerVR SGX 540 GPU clocked at 400MHz. It has a 7-inch 1280x800 touchscreen, 1GB of RAM, 1.2-megapixel front camera, 16GB of storage, mircoSD and microSIM slots that brings full phone and 3G HSPA+ support. It features 4270mAh battery that should, according to Asus, keep it alive for up to 10 hours of video playback and around 32 hours of 3G calls. It will initially run on Android Jelly Bean 4.1.2 OS but Asus promised that the Android 4.2 update will come as soon as possible.

According to Techradar.com, Asus Fonepad should appear for pre-order in the UK at Carphone Warehouse, Amazon and Sainsbury's as of April 12, while shipping should start on April 26.

Of course, we are yet to see some reviews so we'll hold our final judgement until we see it in action. 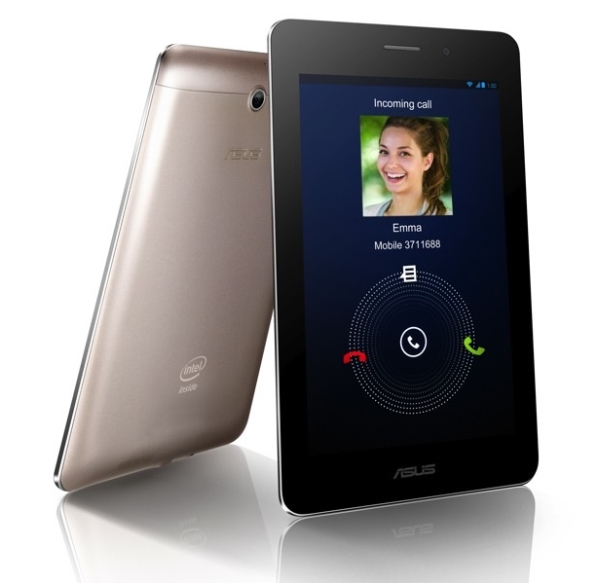 Last modified on 10 April 2013
Rate this item
(0 votes)
Tagged under
More in this category: « Google updates Play Store, gives it a fresh look Windows Phone 8 to support 1080p by year-end »
back to top