The company formerly known as RIM (BlackBerry now) has finally launched its two new smartphones based on the new BlackBerry 10 OS, the BlackBerry Z10 and Q10. Following industry trends, the new OS focuses on touch, despite the fact that Q10 is a standard full QWERTY messenger smartphone.

A couple of first hands-on and reviews have nothing but praise for the new BlackBerry devices but it remains to be seen if consumers and sales will tell the same story.

The BlackBerry's first full-touch BB10 OS based Z10 is built around a 4.2-inch 1280x768 screen (adding up to 356 ppi) and its full dimensions are set at 130x66x9.3mm. These dimensions make it, sort of, bigger than the competition. It weighs in at 138 grams, which is pretty decent number. Behind the 4.2-inch screen ticks a 1.5GHz dual-core Snapdragon S4 Plus CPU paired up with 2GB of RAM. The Snapdragon CPU and pretty high amount of RAM are enough to run circles around BB10 OS and provide quite good multi-tasking experience, as far as we could pick up from those early hands-on and reviews.

The rest of the specs include 16GB of internal storage expandable with a microSD card, 8-megapixel rear snapper with TimeShift that can record 1080p video, an HDMI port, 802.11bgn WiFi, Bluetooth 4.0, LTE support (depending on the market) and NFC. Blackberry also pointed a lot of attention to, what they call, an advance touchscreen keyboard since the Z10 lacks BlackBerry's prominent feature, a hardware QWERTY keyboard.

The BlackBerry Q10 on the other hand will appeal to loyal RIM fans as we are looking at a standard messenger smartphone with full QWERTY keyboard. Featuring a square 3.1-inch AMOLED 720x720 screen (330 ppi). The BlackBerry Q10 allegedly features the same chipset as the Z10 so we are looking at a 1.5GHz dual-core CPU and 2GB of RAM. It features an impressive stainless steel frame and edge-to-edge glass on the front which certainly makes it the most impressive messenger smartphone that we have seen so far.

According to early info, the Z10 should be available in the UK as of tomorrow, Canada on 5th of February for CAN $149.99 (with three-year contract), while it is expected to hit the US carrier Verizon in March for US $199.99 with a two-year contract.

The Q10, on the other hand, is yet to be fully detailed but is expected to arrive sometime in April. 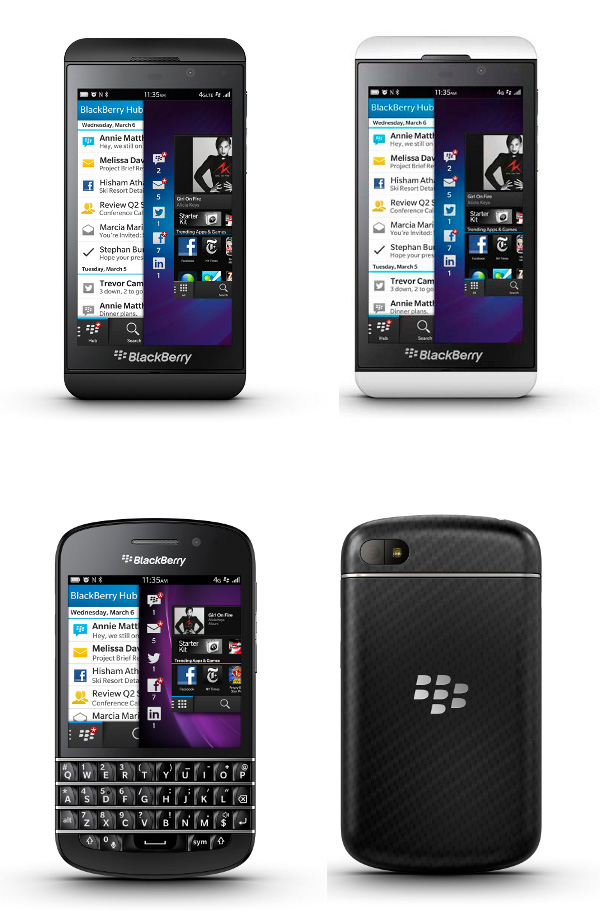 Last modified on 31 January 2013
Rate this item
(0 votes)
Tagged under
More in this category: « Nokia schedules its MWC event for February 25th Samsung Galaxy S IV might launch in April »
back to top