There has been some rumbling regarding Orange's move to be one of the first to officially go for Intel's Medfield chip and finally some specs and pictures have showed up online. Orange is the first to announce and later ship Intel powered phones in Europe.

Although it looks like Intel's reference device that was previously seen at CES 2012, Orange version  looks a bit more polished. The specs include Intel's Atom Z2460 CPU paired up with Intel XMM 6260 HSPA+ loving platform. The chip is placed behind 4.03-inch 600x1024 screen and packs 8MP back, with support for 1080p and 1.3MP front camera.

The dimensions of the new Orange, "Orange Santa Clara" codenamed, smartphone are set at 123x63x9.99mm and it weighs in at 117g. The rest of currently known specs also includes Bluetooth 2.1, A-GPS, 802.11bgn WiFi and 16GB of storage space. Unfortunately, the new smartphone will hit retail/e-tail with Android Gingerbread OS while ICS update is planed to follow "shortly thereafter".

According to Orange, the device will be exclusive to Orange customers in the UK and France. Intel also started an advertising campaign at European version of Wall Street Journal to support this brave move from Orange. Since Orange branded phones are usually much cheaper than the better branded competition, this kind of backs our story that Intel goes for the affordable market, here. 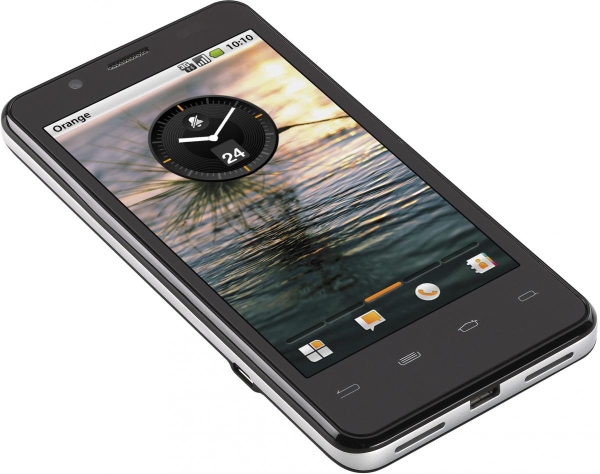 Last modified on 27 February 2012
Rate this item
(0 votes)
Tagged under
More in this category: « HTC's One S and One V officially launched Asus Padfone officially unveiled »
back to top