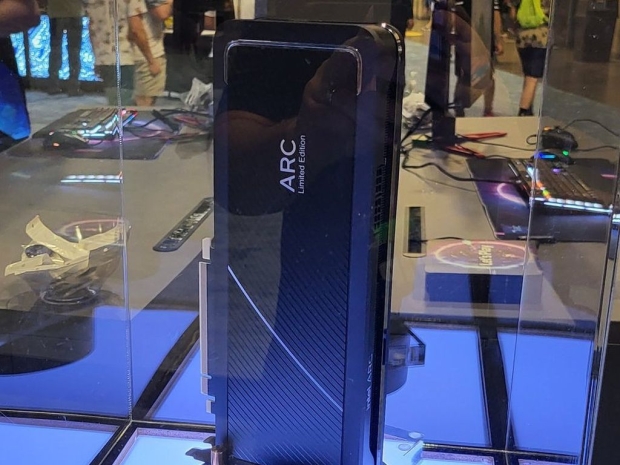 Desktop Alchemist behind a dual-fan design

While we have already seen the flagship Intel Arc desktop graphics card in a teaser video, it made a surprise appearance at the Intel Extreme Masters (IEM) 2022 in Dallas, USA

Placed inside a glass case, the Arc A770, or the Arc A780, is based on a fully enabled ACM-G10 GPU with 32 Xe-Cores and according to what could be seen, it comes with 16GB of GDDR6 memory and is powered by an 8-pin and a 6-pin PCIe power connector.

Originally spotted by Bryce_GfxDriverGuru over at Twitter and reported by Videocardz.com, the Intel Arc A770 graphics card was expected to compete with the likes of Radeon RX 6700 or the Geforce RTX 3070, but so far it is unclear when we'll actually see them on retail/e-tail shelves.

Intel @ @IEM
Look at what made an appearance! 👀
Come by the ARC booth and check it out in action pic.twitter.com/vrscP08rHG

Rate this item
(0 votes)
Tagged under
More in this category: « AMD might be preparing Radeon RX 6700 (non-XT) AMD RDNA 3 GPU architecture promises over 50 percent improvement »
back to top