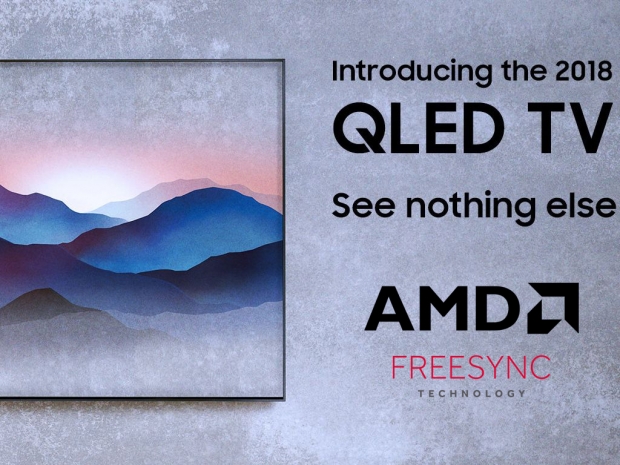 AMD and Samsung have officially announced support for FreeSync that will be coming to Samsung's QLED TVs.

The FreeSync support, which will be pushed via an OTA Gamer Mode update, will be available on Samsung's NU8000/NU8500 series QLED TVs in 55- to 82-inches in size.

According to AMD, this update will bring "the ultimate, ultrawide 4K gaming experience" to a whole new format, big screen TVs. AMD was keen to note that FreeSync will be supported on compatible Radeon graphics cards as well as Microsoft's Xbox One S and One X game consoles.

AMD also said that there are currently over 250 compatible FreeSync displays from over 20 partners. Samsung's QLED series also brings HDR support with up to 1,000 nits of brightness as well as high refresh rates and low latency, making them perfect for gaming on big TVs.

"Whether you're a console or PC gamer, playing on a PC display or your living room TV, Radeon FreeSync technology powers exceptional stutter-free gaming experiences," said Scott Herkelman, VP & GM at Radeon Technologies Group, AMD. "We launched FreeSync technology with a mission to end frame tearing and dropped frames, as well as improve the experience for gamers around the world. With Samsung's FreeSync technology QLED TVs, extra smooth gameplay visuals have never been so accessible, and never in such a large and appealing format."

As noted, the support will be pushed as a part of an automatic Game Mode update. You can check out more details on Samsung's 2018 QLED range over at the official site while FreeSync TV is detailed over at AMD's own website.

Last modified on 06 June 2018
Rate this item
(0 votes)
Tagged under
More in this category: « No new Geforce announcement coming "very soon" After Navi 7nm comes Next gen 7nm+ »
back to top