Nvidia to showcase Volta in early May 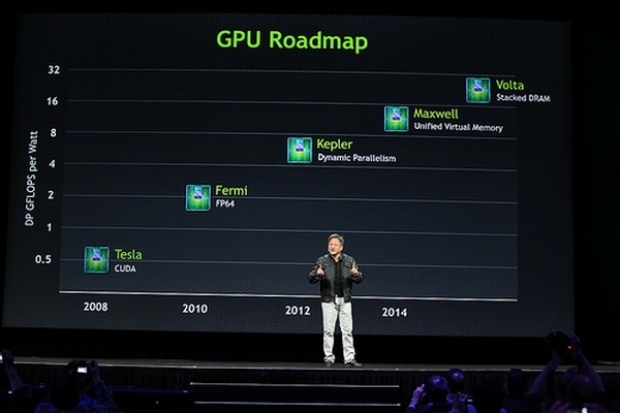 Nvidia is quite happy with the performance of its Geforce GTX 1080 Ti and the new Titan Xp cards, but it seems that it plans to tell us a bit more about the Volta.

Volta, the successor to the Pascal architecture, will first debut as a data center, deep learning, artificial intelligence product, since margins in this market are much higher than with the gaming stuff. The first time Nvidia talked about the codename Volta was in March 2013. At that time, Jen-Hsun Huang revealed at GTC 2013 that Nvidia aims to achieve  1TB/sec of bandwidth on Volta. 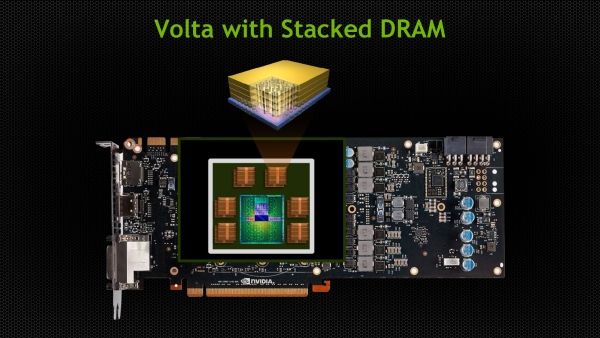 If you remember the GP100, the first Pascal GPU that supported the HMB memory from the house of Nvidia,  it mainly targeted the GPGPU market and it found a crucial place inside Nvidia’s most expensive product ever, called DGX-1 that sells for a tiny $129,000. Back in 2013, Nvidia didn't had a solid plan for Pascal, but it introduced a newcomer codenamed Pascal - a chip that would support both HBM and standard GDDR memory. This was a safer solution as Nvidia realized early that HBM 2 won't be available at an acceptable price-point in 2016 as AMD had hoped for with Vega.

One logical codename for the GP100 codename would be the GV100, as in Geforce Volta 100. A few magazines pointed out that Volta might come in 2018 with GDDR6, but Fudzilla expects that we will see Volta based GPUs probably before the end of summer, or should we say Q3 2017.

All eyes are not pointed at AMD as people expect to see the highly anticipated Vega cards shipping. According to the latest information, we should see the Vega cards launching in the course of Q2 2017, so before the June 30 2017. The most logical place to launch would be a few days before or after Computex 2017, that's between May 30 and June 3 2017.

We expect to see Volta using HBM 2 memory for the GV100 part and the GV104 -  the GPU version of the chip is likely to use the GDDR5X with some Titan versions possible with HBM 2, but only if being really pushed by Vega.

Of course, Jensen will shortly share some official Volta information, in the second week of May.