Nvidia is finally not just a GPU company 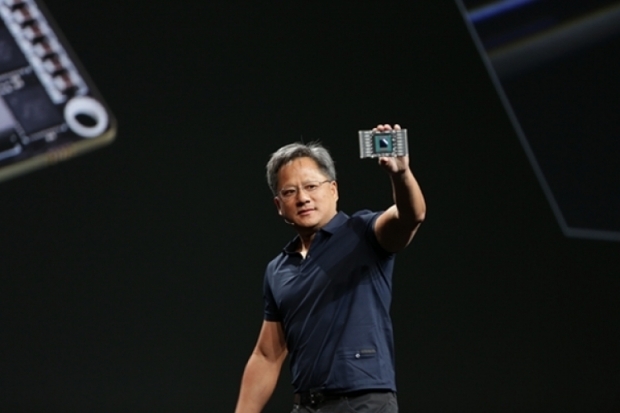 There is more to life than pixels

Nvidia just announced its fiscal Q3 2017 (not a typo Ed.) and the company reported record revenue of $2 billion, up 54 percent from a year ago. This is finally proof that Nvidia is more than a GPU outfit, as it finally expanded beyond its core business - gaming and professional graphics.

It took Nvidia a lot of sweat and a lot of failed products to get to where it is today. CEO Jen-Hsun Huang is not afraid of failure and as the CEO he took a lot of risks, knowing that one of them would eventually pay off. Don't get me wrong, most of the money still comes from the gaming division, where Nvidia made $1.244 billion, +63.47% year over year and  +58% quarter over quarter. The new Pascal architecture is obviously paying off big time. In recent years, Nvidia executives started talking more about automotive and deep learning, than about gaming. Huang wants to present Nvidia in a new light, to prove that is more than "just" a PC gaming company.

If you have been following Nvidia over the last 23 years as avidly as we have, you will know that many products and acquisitions didn’t pan out. Let me just mention a few obvious ones, starting with the PortalPlayer deal valued at $357 million. At the time, these guys were delivering chips for iPods, shortly before the company lost that deal. It also includes Agea, that promised a gaming physics revolution in 2008, but that failed to change the gaming world. The most recent acquisition was Icera, a modem company bought  in 2011 that was supposed to help Nvidia to fight in the mobile market. That didn't work out either.

Nvidia completely retreated from the mobile phone market after realizing that it could compete on its own terms or change the world of mobile phones. It tried to make its  own gaming devices including Tegra-based tablets and TV consoles but didn’t really move mountains, cashing niche success with their own devices. It would have been better had Nvidia not been forced to recall one of its products due to faulty batteries.

But Nvidia realized that self-driving cars and deep learning could hugely benefit from its GPU architecture. This is when Nvidia started to abandon the company tradition of only caring about pixels. The latest quarterly report is the culmination of a a long process of transition from a mobile and GPU-oriented company to something bigger, a company whose processors might end up in millions of cars, helping you safely get from point A to point B. It will also help to train many artificial intelligence systems including robots with the help of deep learning algorithms.

This is not as sexy as some of the ideas Jensen promoted in recent years. Huang always looked up to Steve Jobs and wanted to create a product you cannot live without, something that Jobs managed to do for many products and services. We can single out the iPod, iPhone, iPad and many Macs that gained a fanatical following. Essentially Nvidia GPUs might end up in many cars. Tesla and Volvo are the first to announce the commitment to Drive PX2 assisted driving systems and there will be more announcements in the future. 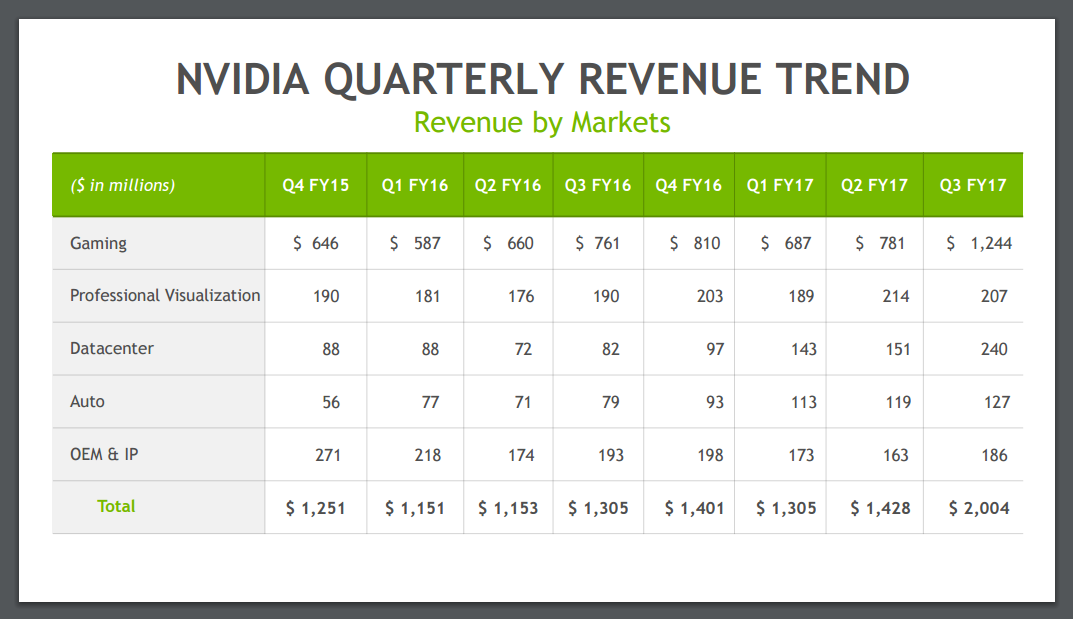 Nvidia is currently the king of the PC gaming market as well as the king of the professional GPU market with its Quadro product line. Many high-end PCs have Geforce cards in them, representing a stable revenue base, under the helm of industry veteran and Geforce General Manager Jeff Fisher. This division has been doing great for the last few years, putting a lot of pressure on AMD's Radeon Technology Group, its primary competitor in the desktop and notebook markets. Gaming will remain the main source of income for Nvidia, backed by the Quadro professional graphics business, which is an incredible cash cow. The beauty is that the Quadro uses the same gaming GPU with a special professional driver and sells for a few times the price, and this is where most of the money is coming from - software rather than silicon.

So, the fact is that Nvidia lost most of its entry level business, due to market trends and the death of discrete entry-level GPUs, Nvidia actually lost a market that wasn't making that much money after all. Gaming is what Nvidia knows, and which makes them most money on the desktop market, and this is going to continue. There is always a big threat that the Radeon team might come up more competitive products in 2017 and reclaim some of these huge gains from Nvidia.

The future growth of Nvidia will concentrate on automotive and deep learning, as Nvidia can sell a lot of these systems to big companies. Microsoft, Google, Facebook and Baidu see great potential in the deep learning market. SAP, educational institutions, start-ups, oil and gas industry, as well as the financial markets are looking into using deep learning computers and some of them, such as the DGX1, cost more than $100,000 for education and even more for industry use.

Market response to the latest quarterly report was quick. Last time we checked, Nvidia was up more than 29.73 percent to $87.92. Good job.

Last modified on 12 November 2016
Rate this item
(13 votes)
Tagged under
More in this category: « Nvidia delivers stonking results Nvidia’s 2017 trouble is called RTG »
back to top