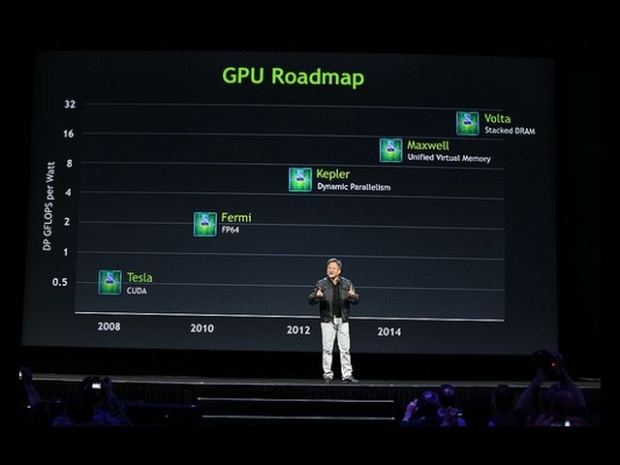 While Vega sticks with 14nm

A little birdie told us that Nvidia is giving its Volta the 16nm FinFET treatment. This product uses stacked DRAM too so it looks like the whole thing will be pretty bleeding edge.

Our same deep throat told us that the performance per watt is expected to increase tremendously. Although this might be vague, little is known about Volta other than it is arriving after Pascal so any information we get is news. The earliest we expect Volta is 2017.

It is interesting to see that the lag between the GPU manufacturing and mobile processor manicuring is getting bigger. We expect to see Apple and Qualcomm making their first 10nm chips this year and it is unlikely that the GPU guys can match them.

The next generation Nvidia Volta GPU will stick with TSMC's 16nm FinFET at . AMD will use 14nm Global Foundries for its Vega HBM 2.0 powered card. This is also scheduled for 2017. AMD’s CPUs will go directly from 14nm to 7nm so there is a chance that GPUs will skip 10nm and go directly to 7nm. This will probably take a lot longer to happen.

GPUs are complex parts and it takes time to get them to work using new manufacturing processes.

Mobile SoCs will head to 7nm in late 2017 or early 2018 but it will be interesting to see what will be the next manufacturing nod for the GPUs.