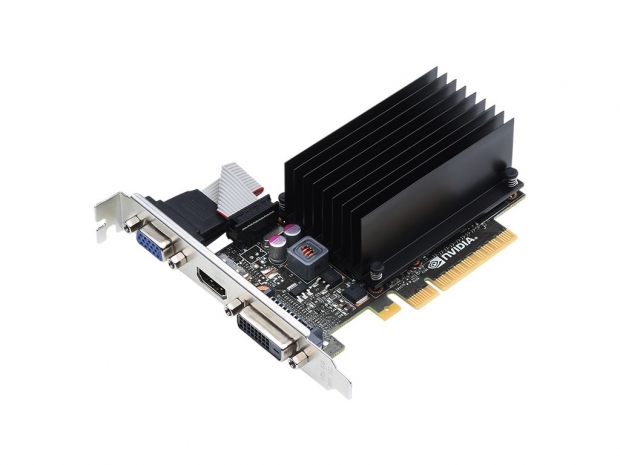 EVGA comes up with a couple of versions

Nvidia has now officially launched its entry-level Geforce GT 710 graphics card based on Kepler GPU, saying that it is up to 10 times faster than most integrated graphics solutions, and EVGA has a full lineup ready.

According to Nvidia, the new Geforce GT 710 is not only up to 10 times faster than "most integrated graphics solutions" but it is also around 70 percent faster than the previous generation, GT 610, and also offers multi-monitor support for up to three HD displays.

The Geforce GT 710 is based on an older Kepler GPU with 192 CUDA cores and will be available with either 1GB or 2GB of DDR3 memory paired up with a 64-bit memory interface. It is obvious that this is a significant boost from 64 CUDA cores on the GT 610. The GPU on the GT 710 is clocked at 954MHz while memory will be clocked at up to 1800MHz.

While Nvidia did not announce any details regarding the price, EVGA's lineup goes for around US $49.99 for the 2GB version and US $42.99 for the 1GB version.

Rate this item
(8 votes)
Tagged under
More in this category: « Nvidia shows off its 'Light Field' VR headset at VRLA 2016 AMD opens up the GPU »
back to top