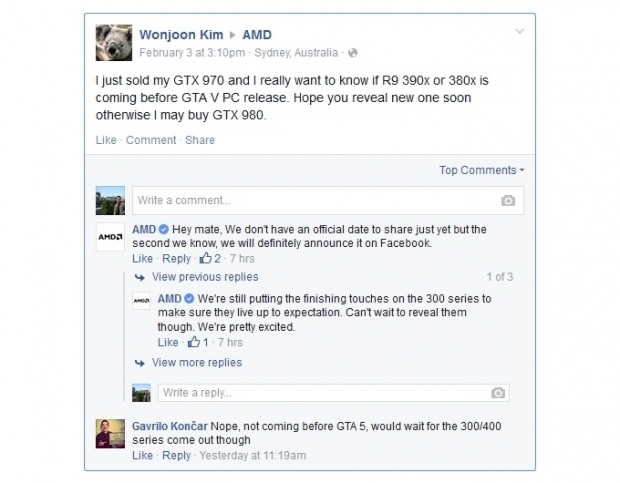 While there have been plenty of rumors regarding AMD's upcoming Radeon R9 300 series graphics cards, including details on the Fiji XT GPU and High-Bandwidth Memory (HBM), AMD has now officially confirmed that it is putting the finishing touches on the new Radeon R9 300 series.

During its latest quarterly earnings call, AMD CEO Dr. Lisa Su, confirmed that the company is working on Radeon R9 390 graphics card scheduled for the second quarter of this year, which will feature 4096 GCN 1.2 cores as well as 4GB of stacked High-Bandwidth Memory (HBM). During the same call, Su also confirmed the existence of the new Trinidad GPU that should replace the Curacao GPU and offer competitive performance at the 200 price-point.

Today, AMD used its official Facebook page to confirm the Radeon R9 300 series is indeed coming soon as the company is "putting the finishing touches on the 300 series to make sure they live up to expectation," and that they "can't wait to reveal them."

While the comment on the official AMD Facebook page did not include an official date, this lines up with recent rumors that the company has completed the certification process for the Fiji XT GPU.

Recent rumours also suggest AMD is also working on a Hawaii-refresh which should squeeze a bit more performance from the well known GPU which is behind the R9 295X2 dual-GPU graphics card as well as the Radeon R9 290X and the R9 290.

In any case, AMD will hopefully launch its new Radeon R9 300 series in early Q2 2015, so we will hear more about it pretty soon.