Today we have a first picture of the GTX 970 coming from one of Nvidia's add-in-board (AIB) partners, which now pretty much confirms that Nvidia has decided to skip the GTX 800 series naming and jump directly to the GTX 900 series.

While we already pretty much knew that this was the case, the first picture of Zotac's GTX 970 next to the box, spotted by Videocardz.com, confirms the earlier reports. As reported earlier, most GTX 970 cards that will come to the market will be based on a custom design and Zotac's GTX 970 is not an exception.

It features a custom PCB as well as a custom cooler with two 80mm fans. Since the box does not have any OC or AMP! labels, we guess that the picture Zotac GTX 970 will work at previously reported reference 1051MHZ GPU base and 1178MHz GPU Booost while 4GB of GDDR5 memory paired up with a 256-bit memory interface should be working at 7012MHz.

In case you missed it earlier, the GTX 970 is based on the new 28nm GM204 GPU and should, according to earlier reports, pack 1664 CUDA cores, 138 TMUs and 32 ROPs. The Geforce GTX 970 should be announced at previously scheduled by Nvidia for 18th of September. 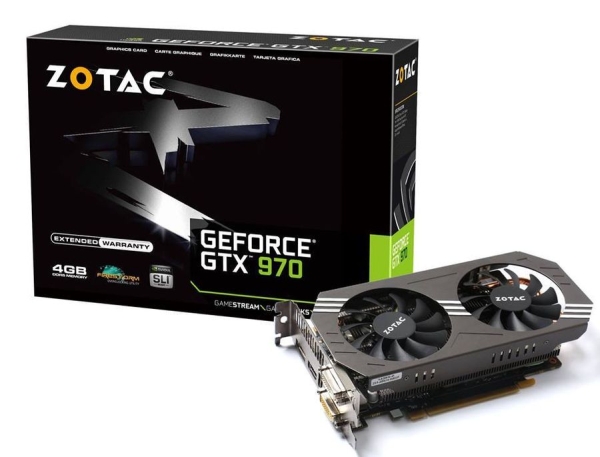 Last modified on 12 September 2014
Rate this item
(0 votes)
Tagged under
More in this category: « AMD’s FreeSync only for new GPUs Samsung is building a GPU »
back to top