While the GTX 750 and the GTX 750 Ti were the first GM107 Maxwell based cards to launch, the mobile GTX 860M was actually the first one where the GM107 was spotted. Today we have some of the first details regarding the performance of the GTX 860M.

Details showed up at NotebookReview forums and accoding to a GPU-Z screenshot, the GPU behind the GTX 860M is identical to the GTX 750 Ti, which mean it packs 640 CUDA cores, 40 TMUs, 16 ROPs and a 128-bit memory interface with 2GB of GDDR5 memory. The GPU-Z obviously had trouble reading the GPU clock and showed 540MHz but the memory clock looks real at at 5.0GHz.

According to a couple of first tests, the GTX 860M ended up twice as fast as the previously available GTX 660M. It managed to score P5339 in 3DMark 11 performance preset and X1662 in the extreme preset.

Of course, all we need to see are some notebooks with the Nvidia GTX 860M graphics card on board but we guess we will not have to wait long for those.

You can check out the rest of the details here. 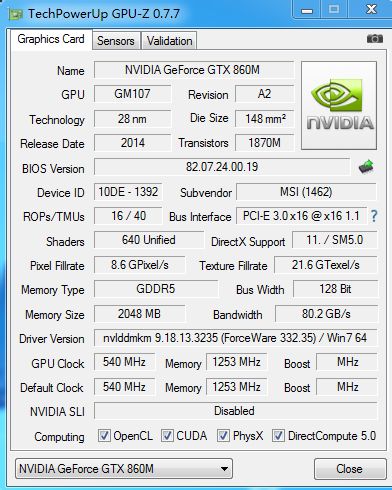 Last modified on 07 March 2014
Rate this item
(0 votes)
Tagged under
More in this category: « AMD loves DirectX 12 Asus working on dual Hawaii XT based graphics card »
back to top