Nvidia has been touting Tegra as the next big thing for the past couple of years, so it comes as no surprise that CEO Jen Hsun Huang has high hopes for tablets and smartphones.

According to Huang, tablets are the fastest growing consumer electronics category in history and two years after Apple introduced the first generation iPad, non-Apple tablets make up about 40 percent of the market. Android vendors hope to expand their offer, namely thanks to Android 4.0.

The big deal with Android 4.0 is that it will integrate tablet and smartphone Android versions, and it is coming at a time when companies like Nvidia, Qualcomm and Texas Instruments are gearing up to introduce even more powerful chips that could transform tablets into pretty serious computers and find their way into new form factors. Huang believes Android will eventually power more than 250 million Android devices and it is already starting to attract hordes of developers. With 14,000 new apps each month, Android could soon outpace iOS.

As for Nvidia’s own gear, Huang likened the smoothness of ICS on Tegra 3 tablets to a baby’s bottom. Nvidia believes it will score more design wins for the Tegra 3 than Tegra 2, however we have yet to see the design wins translate into actual products in retail. Jensen expects that tablets will be the new black, all thanks to touch technology and ease of use.

Nvidia hopes it will do well with the gaming crowd thanks to Tegra Zone, but we can’t help but notice that you still can’t get an ICS Tegra 3 tablet, which was used by Huang on the stage. A multplayer demo of Shadowgum was also shown off, with Fatal1ty on the controls of an Asus Transformer Prime tablet. 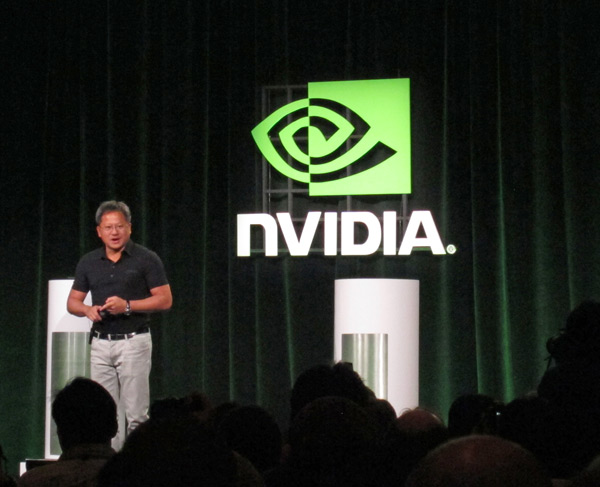 Last modified on 10 January 2012
Rate this item
(0 votes)
Tagged under
More in this category: « Jensen on Kepler Lenovo unveils K91, the "world's most advanced HDTV" »
back to top