KFA2 has launched its latest addition to the MDT X4 lineup that also happens to be a flagship of the series, the KFA2 Geforce GTX 580 MDT X4 EX OC.

As it was the case with the entire MDT series, the GTX 580 MDT X4 EX OC also support up to four displays at the same time via 3 mini-HDMI in span mode plus one via DisplayPort outputs. It also includes "virtual single monitor mode" that shares one desktop across three screens over mini-HDMI at maximum 5760x1080@50Hz (3x 1920x1080).

As far as the specs go, the new GTX 580 MDT X4 EX OC features 512 CUDA cores, works at 840MHz for the GPU and features 1538MB of GDDR5 memory clocked at 4008MHz and paried up with a 384-bit memory interface. The card is cooled by a rather huge triple-fan cooler backed by a custom backplate. The card features three mini-HDMI and single DisplayPort outputs.

Unfortunately, the price or the actual release date haven't been announced. 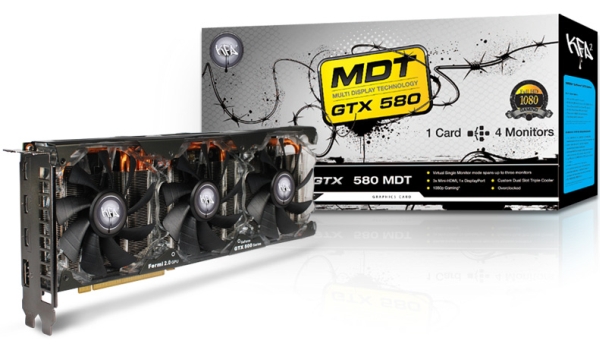