In addition to all the rumours and leaks regarding the Tahiti HD 7970/7950 GPU, the first picture of the Cape Verde XT equipped Radeon HD 7770 graphics card has leaked online.

As it was noted before, Cape Verde GPU is AMD's, one might say long due, replacement of Juniper GPU, the same one that was behind both the HD 5770 and the HD 6770 cards. The design of the HD 7770 looks pretty much what you would expect from a mid-range card, a single center placed fan, dual-slot desing and a cleaner PCB with single 6-pin PCI-Express power connector. By the looks of it, the card should end up to be as long as the HD 6770.

The GPU itself is quite small and should end up at somewhere under 150mm2. The card has four memory chips, so a 128-bit memory interface is practically confirmed. The reference design ended up with DVI, HDMI and mini DisplayPort outputs and due to single PCI-Express 6-pin power connector, the TDP should end up below 150W, most likely somewhere around 100W.

The Cape Verde will be the lowest performing GPU based on the GCN architecture while the rest of the lineup below it should end up to be rebrand of the VLIW5 HD 6000 series with few minor tweaks. According to our sources, Radeon HD 7700 series is still scheduled to appear after Chinese New Year, or mid February.

You can find the original post over at Rage3d forums (via VR-Zone). 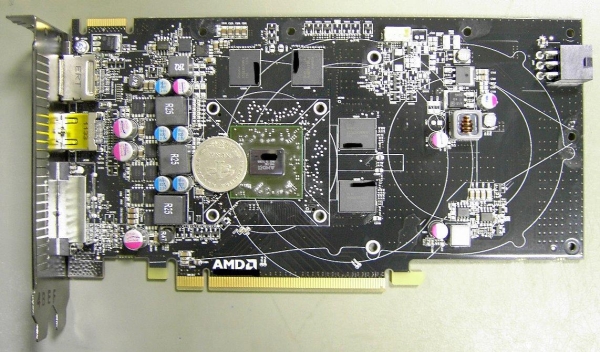