Over the past several months, a significant portion of the mobile DirectX 11 market has been predominated by AMD Radeon Mobility 5000 Series parts. The red team has enjoyed a fair share of design wins, and one of the highest selling points can be attributed to the DirectX 11 feature itself. Nevertheless, the time has arrived for Nvidia to respond with a slew of second-generation mobile Fermi parts catered for a variety of high-end, performance and mainstream budgets.

Back in May, Nvidia launched its flagship Geforce GTX 480M for gamers and mobile enthusiast customers. What surprised most of the industry was the fact that the company had actually used a full GF100 chip which featured the same number of cores as the desktop Geforce GTX 465. Mobile power constraints were tight and exceptionally high, as the GPU consumed 100W alone. Nevertheless, the company has indicated that it intends to capitalize on Optimus Technology as a means to dynamically distribute power between an IGP-enabled GPU and its discreet GPUs.

Today, the company has added the Geforce GTX 470M and Geforce GTX 460M to its high-end mobile DirectX 11 offering, which only included the Geforce GTX 480M up until this point. The Geforce GTX 470M features a 535MHz core clock, 288 CUDA cores operating at 1100MHz, and a 192-bit GDDR5 memory interface operating at 1250MHz with 60GB/s memory bandwidth. This GPU replaces the Geforce GTX 260M with 55W TDP and should fit in a similar power envelope. As AnandTech noted, the core count between generations raises from 112 at 1375MHz to 288 at 1250MHz, an increase of 134 percent. The chip should theoretically double computational performance over its predecessor. However, the memory bandwidth of both GTX 260M and GTX 470M is 60GB/s, and it will be interesting to observe if Nvidia's decision to leave memory bandwidth the same may have any effects on gaming performance. 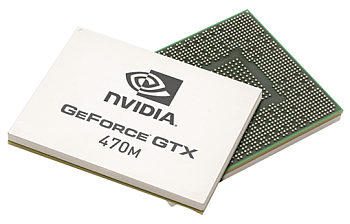 In addition, the Geforce GTX 460M features a 675MHz core clock, 192 CUDA cores operating at 1350MHz, and a 192-bit GDDR5 memory interface operating at 1250MHz with 60GB/s memory bandwidth. This GPU replaces both the Geforce GTS 360M and Geforce GTS 350M, neither of which made a significant presence in the notebook market. The chip should also fit in a similar power 40W TDP envelope. Just like the GTX 470M, the chip should theoretically double computational performance over its predecessors, and the memory bandwidth story is the same as the GTX 470M.

When AMD launched its performance and midrange Radeon Mobility HD 5000 Series GPUs, many analysts noted that performance drops between the high-end segment and the midrange segment were rather significant. For instance, the drop from Radeon Mobility HD 5800 Series to the HD 5700 and HD 5600 parts often expressed less than half the computational performance. Meanwhile, the majority of consumers in this market range weren't too concerned, as long as the associated notebook device combined the "DirectX 11" logo with a reasonable TDP envelope and ensured strong battery life for day-to-day productivity purposes.

Now that Nvidia's engineers have spent a considerable amount of time refining transistor leakage, high amperage choices and other hardware problems that plagued the original GF100, the company is ready to release much cooler mobile versions of its second-generation chips, GF104, GF106 and GF108. From top to bottom, Nvidia's performance to midrange mobile GPU segment includes the Geforce GT 445M, Geforce GT 435M, Geforce GT 425M, Geforce GT 420M and Geforce GT 415M. From the start, none of these GPUs support SLI, as the company has reserved the feature for its high-end market.

The Geforce GT 445M is the only GPU that can be a mixed bag in terms of hardware specifications. It features a 590MHz core clock and 144 CUDA cores at 1180MHz. However, memory configurations will be available in both a 128-bit DDR3 memory interface operating at 800MHz with 25.6GB/s bandwidth, or a 192-bit GDDR5 memory interface operating at 1250MHz with 60GB/s bandwidth. As AnandTech notes, it appears that the Geforce GT 445M will use the GF104 chip for the higher bandwidth model and GF106 for the lower bandwidth model. In terms of computational performance, the GPU is equivalent to roughly two-thirds of the higher end Geforce GTX 460M for the higher bandwidth 192-bit GDDR5 model. At this point, we are unsure of the extent in which the different bandwidth rates will effect gaming performance, but it would be safe to double check GPU specifications before purchasing a new notebook with a GT 445M. 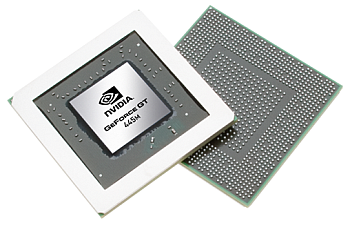 From here on down, the rest of Nvidia's performance and mainstream GPUs use DDR3 memory interfaces. The Geforce GT 435M features a 650MHz core clock, 96 CUDA cores operating at 1300MHz, and 128-bit DDR3 operating at 800MHz with 25.6GB/s memory bandwidth. This GPU directly replaces the Geforce GT 335M, which was famously popularized by the Alienware M11x ultraportable gaming notebook. The core count between generations raises from 72 at 1080MHz to 96 a 1300MHz, but memory bandwidth decreases from 34.1GB/s to 25.6GB/s. In terms of computational performance, the GPU should have a significant 60 percent performance advantage over its predecessor within the same TDP envelope. Based on these numbers alone, we are inclined to believe that Alienware is already at work on a refresh of the M11x, but this time with DirectX 11 and more architectural horsepower. 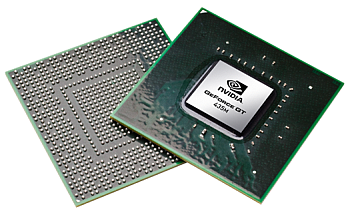 The Geforce GT 425M features a 560MHz core clock, 96 CUDA cores operating at 1120MHz, and 128-bit DDR3 operating at 800MHz with 25.6GB/s memory bandwidth. This GPU directly replaces the Geforce GT 325M and should be based on GF106. The core count between generations doubles from 48 at 990MHz to 96 at 1120MHz, but both feature the same memory bandwidth. In terms of computational performance, the GPU should have roughly a 35 percent performance advantage over its predecessor despite having the same amount of memory bandwidth.

In similarity, the Geforce GT 420M features a slightly reduced 500MHz core clock, 96 CUDA cores operating at 1000MHz, and 128-bit DDR3 operating at 800MHz with 25.6GB/s memory bandwidth. This GPU also replaces the Geforce GT 325M and should also be based on GF106. 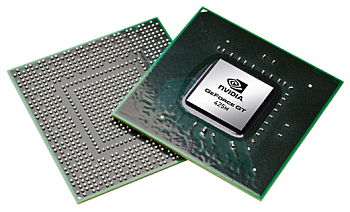 At the bottom of Nvidia's mainstream mobile DirectX 11 list is the Geforce GT 415. Rest assured, the chip packs more punch than many may expect. It features a 500MHz core clock, 48 CUDA cores operating at 1000MHz, and 128-bit DDR3 operating at 800MHz with 25.6GB/s memory bandwidth. This GPU replaces the rather economical Geforce 310M and Geforce 305M and should be based on GF108. What's surprising about the Geforce GT 415 is that the core count literally triples between generations, from 16 at 1150MHz (GT 305M) and 1530MHz (GT 310M) to 48 at 1000MHz. Memory interface width doubles from 64-bit DDR3 to 128-bit DDR3, and memory bandwidth also doubles from 12.8GB/s to 25.6GB/s. With these numbers, even the lowest mobile Fermi-based GPU to launch should see a sizable difference in computational performance. 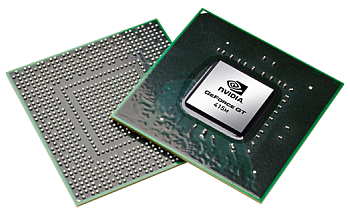 As several analysts have noted, the Geforce GT 310M is already roughly three times faster than Intel's HD Graphics solution and nearly twice as fast as AMD's Radeon Mobility HD 4200 IGP in the 785G chipset. With more users transcoding HD video content on their notebooks, browsing Google Earth in 3D rather than using Google Maps, and utilizing the GPGPU acceleration features of Photoshop CS5, Mozilla Firefox 4 and Google Chrome 7, even the performance of the Geforce GT 415M should serve as a compelling reason to upgrade to a DirectX 11 capable GPU. Nvidia has finally managed to pull its head back in the game, at least in the mobile space. The company's impact on the midrange, performance and high-end desktop GPU markets in 2010 remains another question entirely. Regardless of the competitive advancements at hand, whether or not the decision is AMD or Nvidia, the consumer always wins in the long run.

Last modified on 03 September 2010
Rate this item
(0 votes)
Tagged under
More in this category: « AMD takes small percent of GPU share back AMD VP explains why ATI brand was dropped »
back to top