Broadcom is showing the latest in 802.11 technology at CES in their private suite. The latest iteration of 802.11ac promises Gigabit wireless speeds.

"5G WiFi" is the branding that Broadcom has chosen for their 802.11ac chipsets. Broadcom’s implementation of 802.11ac improves the wireless range in the home, allowing consumers to watch  HD-quality video from more devices, in more places, simultaneously.

The increased speed enables users to download web content from a mobile device faster and quickly sync large files, such  as videos, in a fraction of the time it would take on a similar 802.11n device.  The new IEEE 802.11ac chips are three times faster and up to six times more power efficient than equivalent 802.11n solutions. 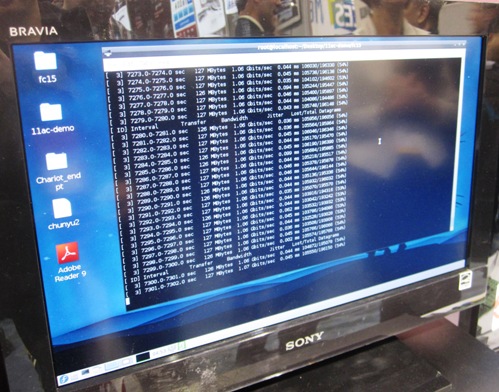 Broadcom announced four chips this week at CES. At the high end, the hardware supports three spatial streams and PHY (physical) rates of up to 1.3Gbps. Even at its low-end chip’s slowest speed though, a single-stream radio has a theoretical top speed of 433Mps which leaves 802.11n, where even multiple-stream devices don’t usually go over 300Mbps, eating its dust.

Although the 802.11ac is still being developed, Broadcom is already showing working silicon that meets the current pre-draft specifications of the IEEE standard. We managed to get pictures of their reference "performance" router design supporting 802.11ac as well as 802.11n radios.

This is how the router looks below. 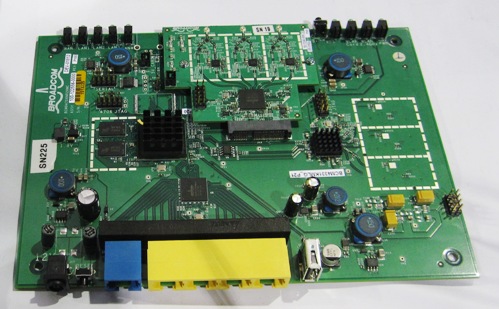 Last modified on 11 January 2012
Rate this item
(0 votes)
Tagged under
More in this category: « Kepler has more design wins than Fermi Trinity gets AMD to Ultrabooks »
back to top