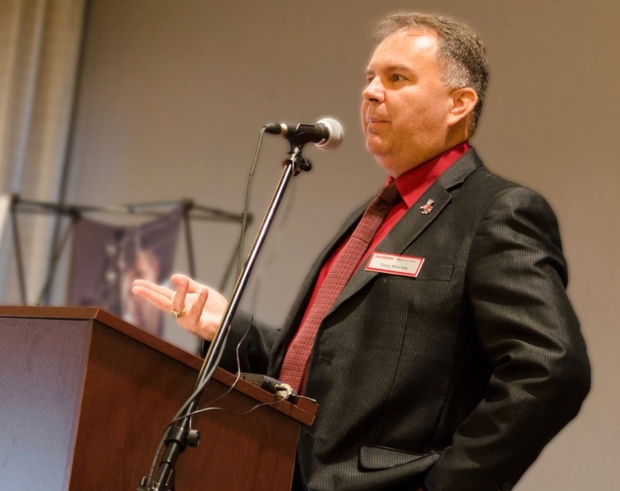 For being a big tit on someone else’s TikTok

Fruity cargo cult vice president of procurement Tony Blevins has been fired for making a gag about “big breasts” on another person’s TikTok account.

The video was made by Daniel Mac and he asked Blevins what he does for a living. Rather than showing him his iPhone and saying how beautiful it was, which is the normal requirement for iPhone users, Blevins responded with a misquote from the 1980s film Arthur: “I race cars and play golf and fondle big-breasted women. But I take weekends and major holidays off.”

Now, we don’t think Blevins does any of those things, because that would require us to believe that Apple fanboys even know what a woman's breast looks like, but after your boss has just made a statement saying that there is no excuse for any company not having 50 per cent of your staff women, it is not a good idea to have a reason going viral on TikTok making off colour gags about mammeries bigger than your own.

The video doesn’t identify Blevins by name and doesn’t reference his position at Apple, though Blevins does note that his job offers “a hell of a dental plan.” Mac’s format on TikTok mostly consists of walking up to people in expensive or luxurious cars and asking what they do for a living.

Bloomberg said that Apple mounted an internal investigation, which resulted in Blevins being removed as the head of his team.

Blevins told Bloomberg that he “would like to take this opportunity to sincerely apologise to anyone who was offended by my mistaken attempt at humor.”

Apple has been rather strict about what its employees post on TikTok. Earlier this year, one engineer alleged that the company was threatening to fire her for a viral video offering tech support to someone who had their phone stolen.

According to a profile from The Wall Street Journal, Blevins’ saved Apple hundreds of millions of dollars during the construction of its Apple Park building.

Last modified on 30 September 2022
Rate this item
(1 Vote)
More in this category: « FTC under pressure to block Amazon's iRobot take over Apple's partners join it in share slump jump »
back to top