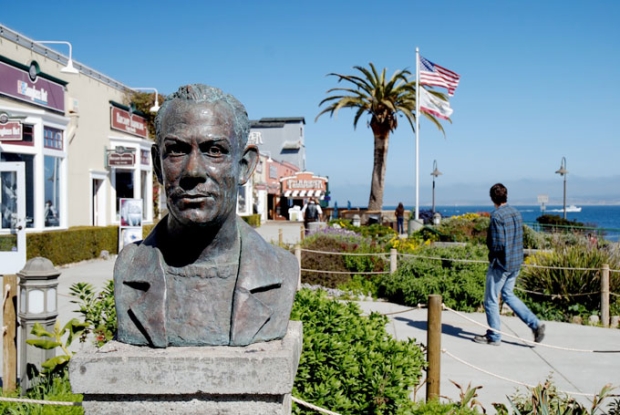 Named after the place where the US’s most boring, and over hyped writer lived

Fruity cargo cult Apple has announced that its macOS Monterey is available .

Monterey is “famous” for being the place of residence of the US writer John Steinbeck a writer so purple and long winded a reader could study his work in secondary school and have retired by the time one of his characters had walked across a village square. Despite his dullness, Steinbeck is one of the US's is most read writers, which we guess is a small pond. Monterey also has other features including its aquarium which are less hyped.

Apple’s operating system is about as exciting. Jobs Mob is hyping it as being “more streamlined” and “making you more productive.”  We guess that means that it has less features and requires you to invest in a slide rule.

Shortcuts, Apple's automation app, is now available on desktop for the first time. Monterey also represents the first-time users can AirPlay content from a Mac. It is no big deal really, even the iPhone can manage that, it is just that Apple’s software genii have not thought to install it in a bigger PC.

The Tame Apple Press insists that the “most anticipated” feature in Monterey is something called Universal Control, which allows you to use a single mouse/trackpad and keyboard to control multiple Macs and iPads simultaneously.

Quite who is anticipating this feature is anyone’s guess as it seems pretty pointless to us… literally.  Ironically the software genii at Apple could not get it to work in time for the public beta rollout of Monterey which gave the Tame Apple Press to hype it into a must have “feature.” Apple thinks there is still some more milage from hyping this pointless feature because Universal Control won't be available to use at launch.

Another feature that Apple could not get out on time is SharePlay which will allow you to share music or watch shows with folks over FaceTime.

Apple does deserve credit for creating an operating system which has even less new features than Windows 11 and is marginally less interesting. Still, it is what  Steinbeck would have wanted.

Last modified on 19 October 2021
Rate this item
(3 votes)
More in this category: « Facebook wants to build a new universe Apple releases a $20 rag »
back to top