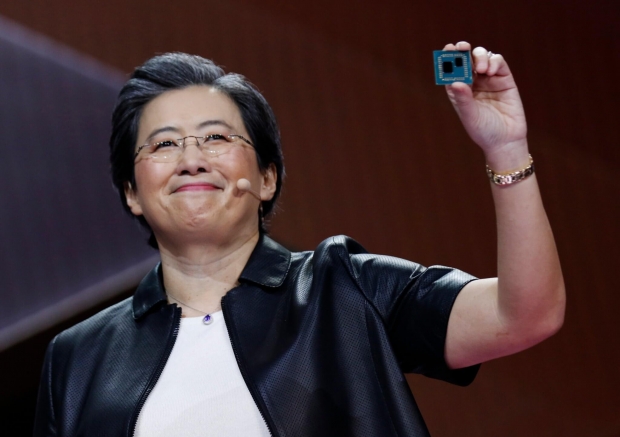 Sales up 26 percent thanks to Ryzen and Epyc

The outfit reported net income of $157 million on a revenue of $1.93 billion. The cocaine nose jobs of Wall Street had predicted that AMD would report second quarter revenue of $1.86 billion so AMD shares went up on the back of the announcement.

AMD CEO Lisa Su said the Ryzen and Epyc revenue more than doubled in the quarter compared to a year ago.

The company projected third quarter revenue of about $2.55 billion, give or take $100 million, up 42 percent from last year.

AMD said that year over year and sequential increases are expected to be primarily driven by Ryzen and EPYC processor sales and next generation semi-custom products.

AMD's results land as rival Intel has been struggling with its 7nm roadmap delays and had to restructure its chip development teams. AMD's rival on graphics chips, Nvidia has been doing well.

On a conference call, Su said AMD accelerated its server and mobile processor businesses significantly in the second quarter, resulting in Ryzen and EPYC processor revenue more than doubling year over year.

"Our focus since launching our Epyc processors has been on building a solid  foundation to drive long-term growth. Our strategy is grounded in driving broad, high-volume adoption with widespread support from industry-leading cloud and hardware providers.  In enterprise, we have significantly expanded our TAM as the number of AMD platforms has increased by more than 40 percent so far this year," Su said.

AMD appears to be feeling rather good about its server market share and Epyc. AMD has roughly three percent market share of the server market but in the past it has managed 20 percent. It is seen as possible to return to those glory days now that Intel's 7nm delay means AMD will be leveraging comparable or superior TSMC process technology for the next two years at least.

Patrick Moorhead, principal of Moor Insights & Strategy, said: "I was pleased to see that Epyc server CPUs set records as it doubled revenue year on year. I attribute most of this Epyc growth to cloud service, SaaS and HPC players embracing the platform more and more. It likely took share in the non-IoT server space."

Last modified on 29 July 2020
Rate this item
(1 Vote)
Tagged under
More in this category: « ARM says its Chinese subsidiary CEO creates a climate of fear Big Tech spins its way through the halls of power »
back to top