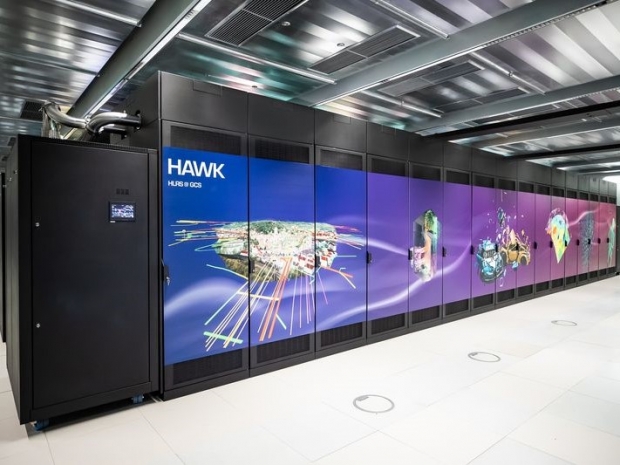 AMD has launched a never seen before 360 virtual tour of the flagship supercomputer ‘Hawk’ at the High-Performance Computing Center Stuttgart (HLRS) of the University of Stuttgart, Germany.

The recently inaugurated Hawk system is among the fastest supercomputers worldwide and the fastest general-purpose system for scientific and industrial computing in Europe.

The virtual tour is at the bottom of this story and reveals an inside look into an impressive technical achievement in European supercomputing. As you ‘move’ around the virtual environment and between the racks, you’ll find links to more detail on the Hawk supercomputer. The tour also includes an interview with Dr. Bastian Koller, Managing Director at HLRS explaining how the system works and its applications. As seen in the tour, the Hawk system consists of 44 racks provided by over 5,600 compute nodes, summing up to over 720,000 compute cores of 2nd Gen AMD EPYC processors.

An Apollo System from Hewlett Packard Enterprise (HPE), Hawk is designed to advance applications in energy, climate, mobility and health, with a peak performance of approximately 26 petaflops (26 quadrillion floating-point operations per second). To illustrate this, petaflop computing enables much more accurate modelling of complex systems, and to match what a one petaflop computer system can do in just one second, you'd have to perform one calculation every second for 31,688,765 years. Hawk allows scientists and engineers to conduct research on larger and more complex phenomena while supporting data-intensive workflows that combine artificial intelligence, big data analysis, deep learning and simulation.

More in this category: « AMD's Lisa Su world's highest-paid CEO Russian CPU is still behind AMD and Intel »
back to top