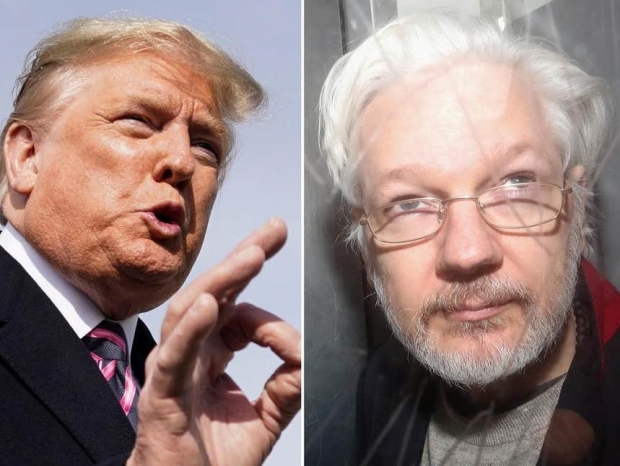 If he denied Trump's Russian links

US President Donald Trump offered Julian Assange a pardon if he would say Russia was not involved in leaking Democratic party emails, a court in London has been told.

The extraordinary claim was made at Westminster magistrates court before the opening next week of Assange’s legal battle to block attempts to extradite him to the US, where he faces charges for publishing hacked documents. To be fair, the allegation was made by Assange and has been denied by a former Republican congressman named by the Assange legal team as a key witness.

Assange’s lawyers alleged that during a visit to London in August 2017, congressman Dana Rohrabacher told the WikiLeaks founder that “on instructions from the president, he was offering a pardon or some other way out, if Mr Assange … said Russia had nothing to do with the DNC [Democratic National Committee] leaks”.

A few hours later, however, Rohrabacher denied the claim, saying he had made the proposal on his own initiative, and that the White House had not endorsed it.

“At no time did I talk to President Trump about Julian Assange,” the former congressman wrote on his personal blog. “Likewise, I was not directed by Trump or anyone else connected with him to meet with Julian Assange. I was on my own fact-finding mission at personal expense to find out the information I thought was important to our country.

“At no time did I offer Julian Assange anything from the president because I had not spoken with the president about this issue at all. However, when speaking with Julian Assange, I told him that if he could provide me information and evidence about who actually gave him the DNC emails, I would then call on President Trump to pardon him.

White House spokeswoman Stephanie Grisham told reporters: “The president barely knows Dana Rohrabacher other than he’s an ex-congressman. He’s never spoken to him on this subject or almost any subject.”

This is a little odd as Trump invited Rohrabacher to the White House in April 2017 after seeing the then-congressman on Fox TV defending the president. He probably just forgot all about it.

Assange appeared in court on Wednesday by videolink from Belmarsh prison, wearing dark tracksuit bottoms and a brown jumper over a white shirt.

Before Rohrabacher’s denial, district judge Vanessa Baraitser, who is hearing the case at Westminster, said the claim of a deal was admissible as evidence.

Until he was voted out of office in 2018, Rohrabacher was a consistent voice in Congress in defence of Vladimir Putin’s Russia, claiming to have been so close to the Russian leader that they had engaged in a drunken arm-wrestling match in the 1990s. In 2012, the FBI warned him that Russian spies were seeking to recruit him as an “agent of influence”.